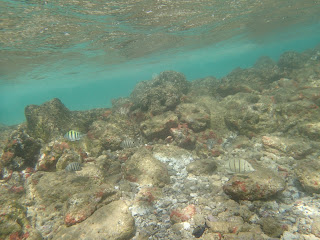 So this morning, since the waves were kinda jamming, I started off in the big pool in Poipu, thinking that I'd have the most energy to combat any current.  Good thing I did, because the waves colliding over the spit created a kind of rip current that kept trying to make me head out to the deeper part.
But that's not the mistake.

The mistake was in the kiddie pool!  I had been cruising along, searching for octopuses and operculum and when I got near the spit, that same current came from the Kiddie Pool over the sandy almost non-existent spit and dragged me over the rocks.  Like I said, Rookie Mistake!

I was able to swim down and get out of the current that tried to drag me further and get back into the shallower water.  Don't do what I did.  It's always best, duh, to watch from both below and above to see where the water is taking you.  Props to God for helping me get over that literal hump!

And to further show you my occasional stupidity, as I was trying to get out of the grip of the current, I was still looking for operculum.  Oy vey. 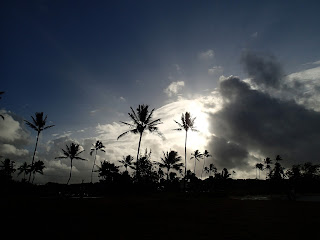 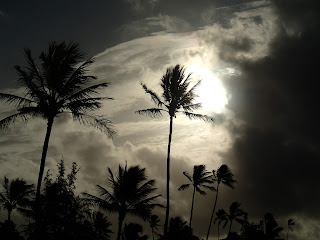 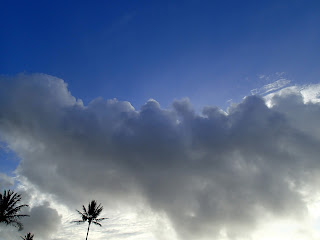 But speaking of God, He gave me some great scenery this morning!

And even a turtle, taking a nap.  Luckily, someone else was on the scene and put up the signs.  I'm told she's from OHIO and loves to do this.  Props to her, also.

I saw just one octopus, but one is all I really need. 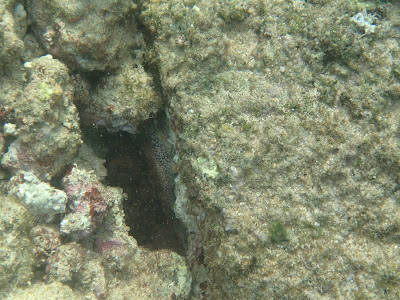 If you look closely, you can see the octopus crammed into that crack in the rocks.  Look for the suckers attached to the inside of the wall on the right hand part of the rock.....Baby didn't want me to see it..I always pray that I won't bother the wildlife when I photograph it, and I'm hoping that this one just slipped down into that crack to hide until I left...I can be a fun person, but perhaps they don't know that about me. (If I could communicate, I would tell them that I would NEVER eat an octopus...) What they probably do know is that some people, like my friend Royden, actually eat these poor animals. The nerve.. 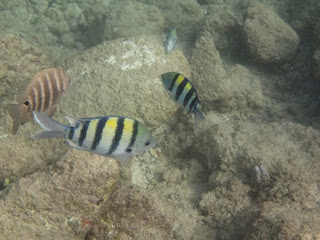 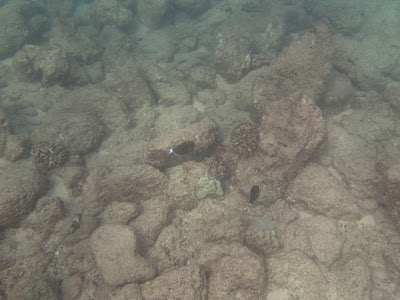 And 2 pinktail durgon! Click click to see them.  They swam away quickly, so I couldn't get a close shot. As usual.

The red eye of the Leaf Fish.  I believe it's a member of the Scorpion Fish family: 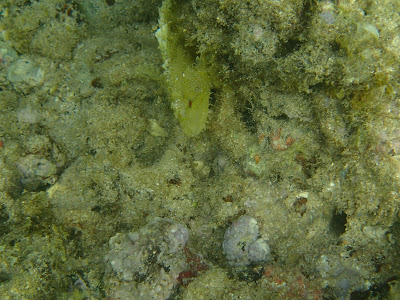 Yellow fish, red eye...It was leaning against the bottom, but still rocking in the current, trying to convince me it really was a leaf.  Fooled I was not! 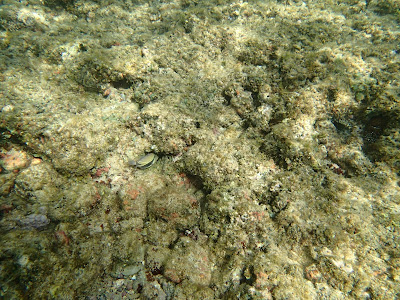 So small you can hardly see it, just left of center..

It is about to dart into that little hole.  So adorable.  I'll bet that works, too, because when they go in there, you can't even see that they are there.

A drupe shell and an urchin 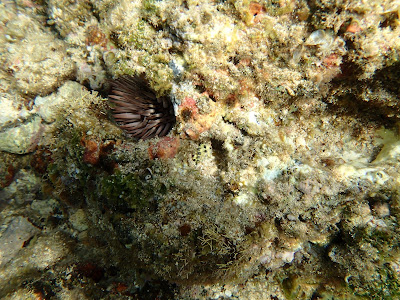 The drupe is the black spotted shell, tucked inside that gap in the rock.  The Boring Urchin apparently bores into rocks, creating its own hidey-hole.  Which explains why the holes always seem to be just their size.  Grant you, I have only heard they do this and never seen any evidence, personally, that they really do.

And here was the big fish of the day: the Barracuda: 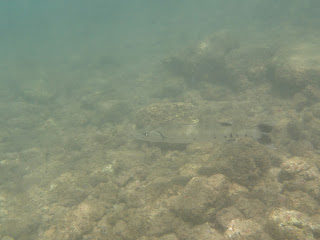 The first one is cropped so you can hopefully see it better.  The one just above these words is the whole photo.  See how they hang out in kinda cloudy water?  For stealth purposes.  And now here's the mystery: 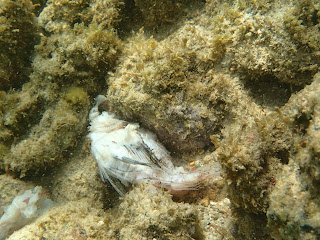 IF and it's a big IF, the barracuda attacked these fish, why didn't it eat them all? Saw several different pieces of dead fish. I guess maybe it's mostly bones left, but it was pretty weird to see the remains on these fish.  I'm thinking they had been in the water a while, too, because they had very little coloration remaining.  At one point, I thought one was a humu, but it was hard to tell with just pieces left...

And so I don't end this blog with a sad note, here's a hidden cowry shell: 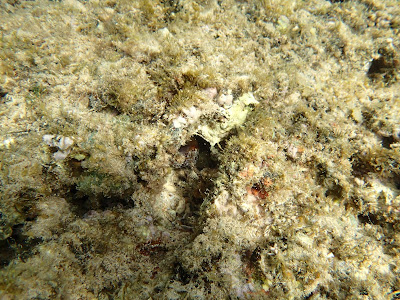 Again, in the middle of the shot....So shiny and pretty and no, I didn't take it home. When they are hiding like that, it's a good bet there's still an animal inside, calling it home.


I got out soon after spotting the barracuda and warned one dad who had his small son in that area: You might want to watch out!  I told him that the barracudas had never bothered me, but the boy was maybe a smaller target.  I'm sure it all turned out ok.

After all, it is the REAL ocean and one never knows who's lurking...