I'm not going to say I'm lazy, but I don't easily have the French circumflex in my symbols, so imagine you see that over the first e of the tete a tete above!

And it literally means head to head, as you probably already know.  (Some French stuff is English too...big surprise.) 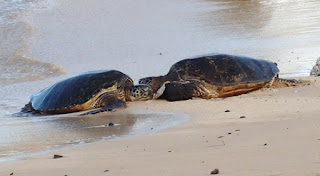 Aww the 2 turtles were having a chat.  And thankfully, most people stayed out of their way.  No lectures were given, so it's all good.

When I arrived in Poipu this morning, signs were up: 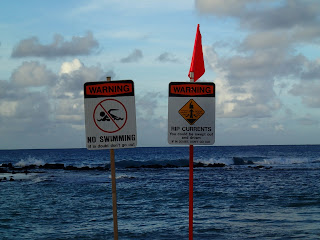 NOT a good sign!  No lifeguards were yet present, so since the signs appeared to refer to the bigger pond, and there were no signs at the smaller pond, I opted to swim in the smaller.  I gave a wide berth to the turtles and got cautiously in.  Shallower water and I swam for nearly a whole hour until I finally decided the waves had moved me around enough and I would start heading in.  That's when I found 3 octopuses!  But I'm getting ahead of myself... 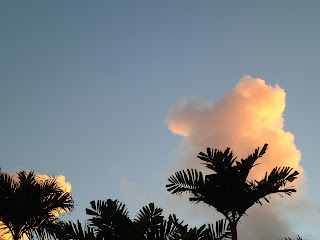 Doesn't it look kinda like a pink cotton ball on top of the tree?  I thought it was pretty, as was this: 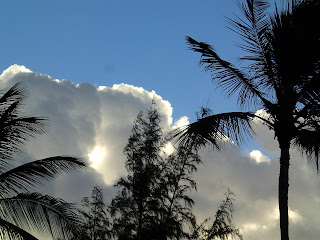 Light does amazing things to clouds...and trees and the water...and it helps you see the Box fish butt: 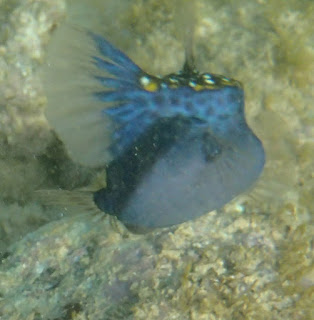 We decided that it was a pretty rare occurrence to see the trunk fish from this angle...It had just leaned down to dart to the bottom for something to eat.  So I got the tail and hind end.  Cute, eh?! (This is a male, because of the blue coloring.)

Two eels were also doing something unusual: sharing their hole: 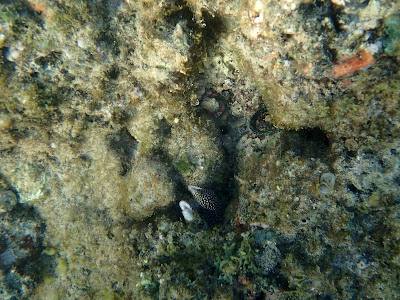 I've seen videos from others where eels from the same species share their holes, but not a couple of different types.  It may not be exactly a rare occurrence, but it is the first time I've seen it.  Maybe it makes a difference that they were both young.  Maybe the size of a thick pencil.

And there were a few crabs:
the first was in a tunnel: 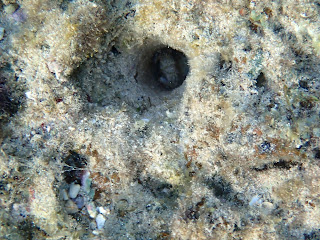 And then there were two, seemingly fighting each other: 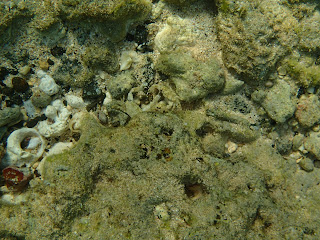 They are unfortunately practically the same color as the rocky, seaweed-y area, but there are two of them.  About mid-photo. Click on it and you'll see them.

And flying around just like seaweed was this very young Rock Mover Wrasse: 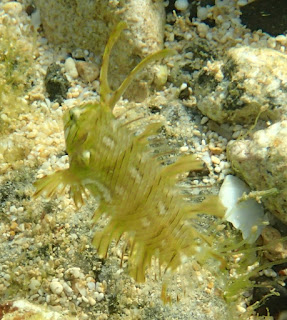 I think this was the smallest and youngest one I've ever seen...it was totally blown about by the current and looked just like seaweed, until you looked closely.  Love those prongs on its head! 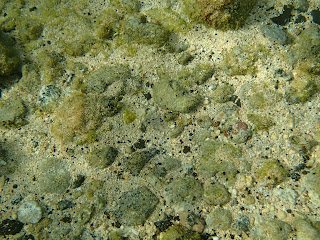 Yes, we should call this one an Eagle Eye Challenge!  It's the Rock Mover Wrasse again in the middle just to the left of the center of the photo.  Click on it if you doubt!  It is bent in half, so it takes up even less space than normal.

And this fish was owning the beach: 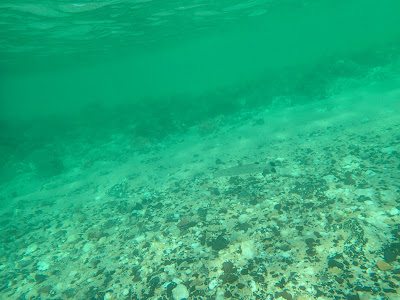 They, too, are hard to see in this type of water...it's a barracuda.  Black triangles on its tail.  It didn't like me being there and truth to tell, I didn't like being near it either.  They have never particularly bothered or challenged me, but that is an experience I'm willing to do without.

And speaking of well hidden, I would probably never have see the Scorpion Fish, had it not moved: 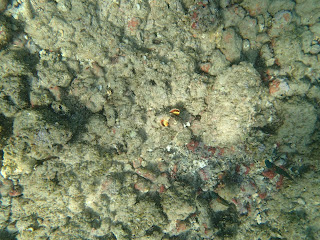 This one showed much more yellow and orange than they normally do.  Would you have spotted it, had you looked upon the following scene? 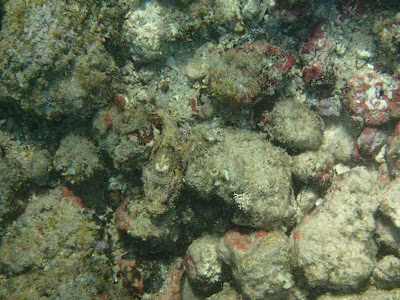 Not exactly in the middle, but to the left of that rock in the middle.  Look for the white on the top of its body...its head is pointed toward the bottom of the frame.  Ugly, right?!  Gee, quite an ugly fish, but one that blended really well with the bottom and surrounding rocks.

And now on to the 3 octopuses!  You KNOW that's what I wait for.. And there were 3, two really young and one older one. 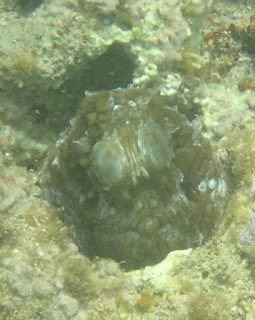 It is a cropped photo, I wasn't that close.  Well, I was on the surface and it was in the rocks, so probably 3 feet separated us. But it did know I was there, because it bopped down a bit when we saw each other.  The two circular areas are the eyes. 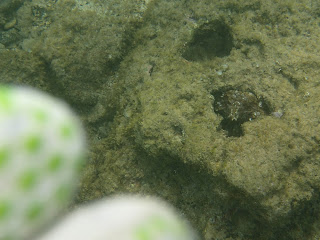 Yes, that is my gloved left hand, counting 2! I like to verify.  The octopus as you can probably see is in the bottom of the two holes to the right.  Sometimes I get these home and wonder if there might have been another one in the hole above.  Not sure that would be normal, but with octopus, one never knows! 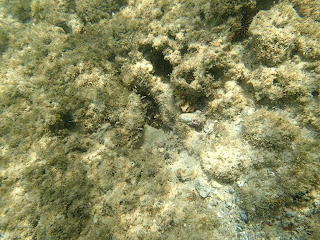 Don't feel badly if you don't see it right away...neither did I. It's again in the middle, tucked well into that hole with a bit of sand outside. I think this one, being older, might have been doing some housekeeping, blowing sand outside to make more room inside. 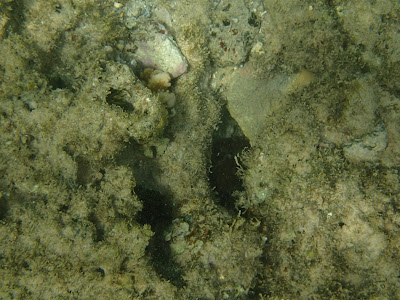 You can just barely see the white siphon of the little guy (in the hole on the right). 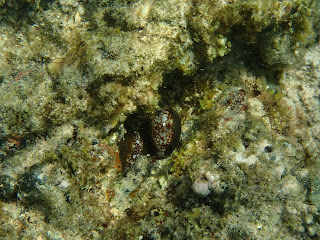 Pretty chummy Cowry shells...two close together hiding underneath a bit of rocky overhang.  Obviously still alive, so they are still there...


Almost out..I thought the white sun shining on the water was pretty: 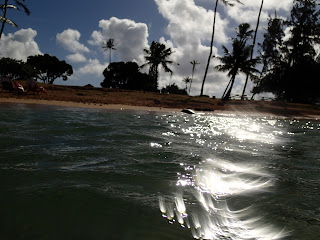 There was just one turtle still napping on the beach.

And a palm tree in a different way: shadowed on the water: 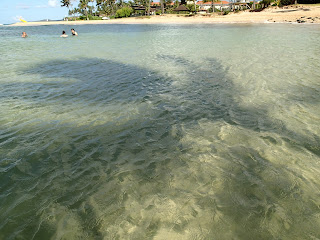 I'm always looking for a way to make them look different for my sweetheart!


And I almost forgot: there was a small Spotted Eagle Ray today too.  Unfortunately, the water wasn't very clear, so you'll have to look carefully for the white triangle...that's it's "wing".. 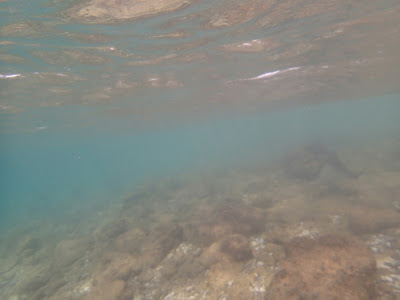 On the right, near the edge of the frame.  Hey! I'm not a professional photog!  Plus, these animals rarely stay still for my camera.

Glad I got in today..