A rainbow too big for the frame! 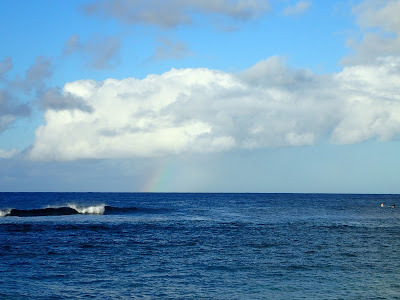 This was the first rainbow I saw this morning.  But then there was a complete one that I caught part of... I do wonder what the paddleboarder on the right saw...if he saw it at all! 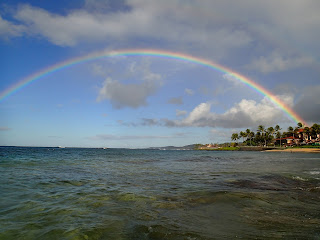 Yup! The rainbow was so big that the whole thing wouldn't fit into the frame.  There was no way to back up enough. So beautiful.

Saw 2 octopuses (yay) and 2 scorpion fish!  (Also, yay, but in a different way..) One of the scorps was one I have never seen before: 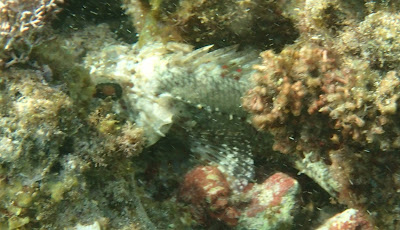 Yeah, look at those spines.  And the eyes.  The eyes are what helped me identify it: it appears to be a Spotfin Scorpion Fish.  Quite different in that it looked more like a fish, as it had visible fishy skin, unlike Scorpion Fish #2: 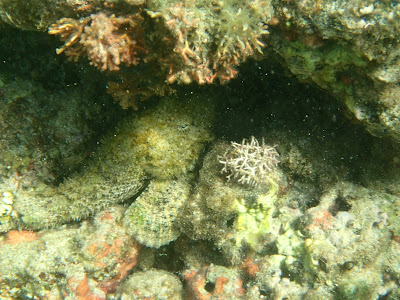 You can see almost the whole fish actually.... The side fin is hanging down near the rock.  The head is just under the overhang and the rest of the body in the left part of the photo.  This one moved, too, so I got to see the startling orange: 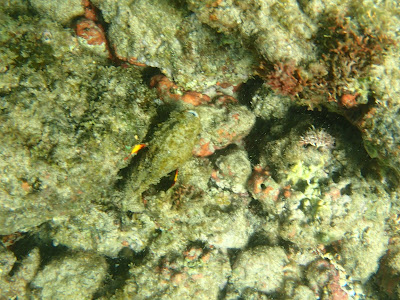 It had just moved, so the fins were a bit extended.  If you look really closely, you can see its mouth was partially open, too.

I'm not going to say they are rare, but they are hard to spot unless they move.

There were lots of shells today (cowry, cone, drupe), but this drupe photo was the coolest one because there were 4 drupes in one shot.  all small... 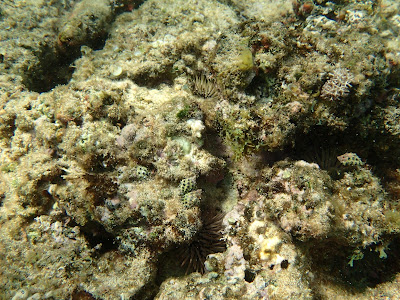 See 'em?  One on the mid-left, then 2 together and then one on the right.  They were all less than 1 inch long.  The polka dots really help you see them.  And before I forget, found out recently that what I thought was a reddish muck on some previous drupes might actually have been a different type of drupe: The Strawberry Drupe.  Who knew? 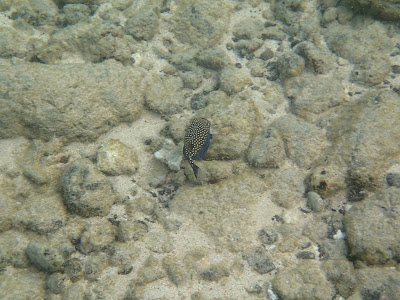 This was a male, who had no time whatsoever for me! 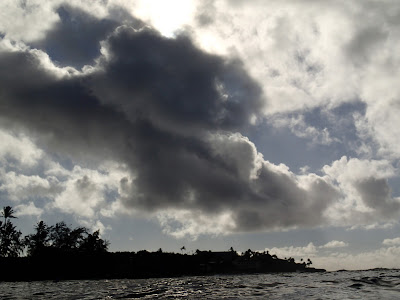 It does seem more dramatic when the sun is hidden behind the cloud...and see how big the cloud was?  It dwarfs the palm trees... 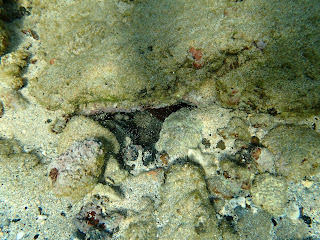 Yes, you might well wonder...but look in the hole.  In the back on the right, there's brown.  That's the adult octopus.

I only found it because it was doing some housekeeping: it had blown sand and probably rocks out of the den, possibly in order to make room for itself.  That way, when snoopy girl divers come into the area, there's a place inside the den to back up and try to be unseen.

Octopus #2 was smaller and much more accommodating: 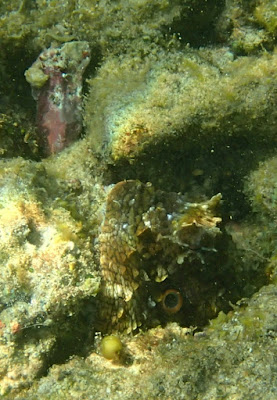 Just look at the little darling, all spike-y.  The eye is the part with the white sunburst lines radiating from it. 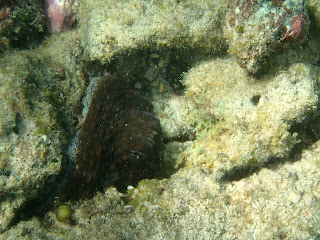 The octopus smoothed out the spikes for this photo. You can't see the white lines near the eyes anymore, either.

And what visit to Poipu would be complete without the turtle: 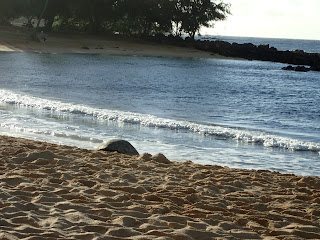 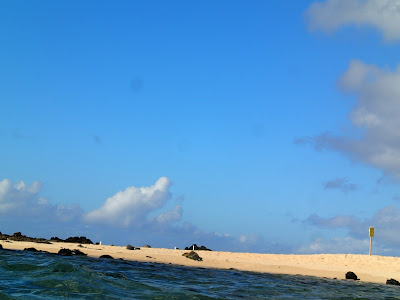 And no lectures were given today!  I like to think that I'm mellowing...haha.  But in this case, the Lifeguard gave the lecture to stay away, so I didn't have to.  Thanks, man!

Now before I leave you alone to enjoy the rest of your day, just a couple more pix of cool animals: 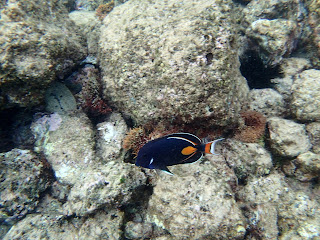 I love this Achilles Tang!
The colors are great and the orange spot and tail are great accents...

And doesn't it look as if the Rock Mover Wrasse is having a moment with the Stocky Hawk Fish? 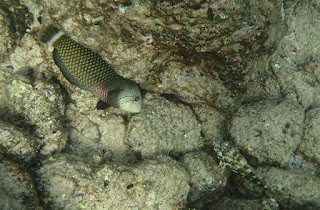 You know I love the Rock Mover, mostly because of the cool transition it goes through from juvenile to adult, but also because they are so mobile and bend-y!  And energetic.  But the hawks are neat too.  Eventually, the hawk moved along. It was probably afraid the Rock Mover would try to move it, like it does the rocks.

And just to prove it's really the REAL OCEAN, a couple of big Bluefin Trevally flew through: 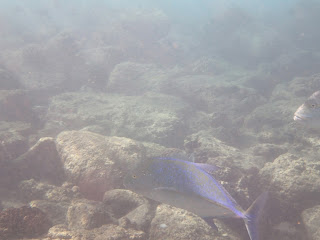 Woo-hoo!  Everyone in the pond, even me, pays attention when these guys fly through.

And a final note of caution:  please check with the lifeguards when you are about to get into the water.  We saw a duo of snorkelers in a very bad and wavy area, not made for good snorkeling.  We watched them to make sure they didn't get into trouble, but please!  If there are no other swimmers in that part of the pond, there's probably a good reason!!!