The fish were flying

As I looked out onto the water I was about to enter, I saw 3 fish, the silvery skinny kind, blast out of the water and zoom about a foot away, entering the water again.  I at first thought: Gee, wish I'd had the video camera going!  Then I thought: What made them jump?

When I have seen this in the past and I was in the water, it was usually a bluefin trevally chasing them.  One of the biggish predators.  The Trevally don't bother me, but larger predators do, so just to be sure it was safe to get in, I paused on the sand, looking for the kind of fin you don't want to see just as you are preparing to get in the water. I waited, watching, for about 5 minutes.  No more jumping.  No fins on the surface.

Grant you, this is not a surefire way to be sure there are no sharks.  But having prayed for safety, I finally entered.  No big bad predators.  Grateful was I!

I did see one octopus, a cute young one. 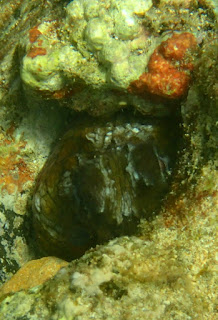 You might not agree that this octopus is cute, but I thought so.  When a fish moved near it, it ducked down. Young, but smart.

Sometimes I can tell there's an octopus in a den, even if I can't see it, because a fish will start going into the den, and come right back out. Mind you, I can't count any octopus unless I actually clap my eyes on it. I try to be sure.

There was also some pretty terrestrial scenery: 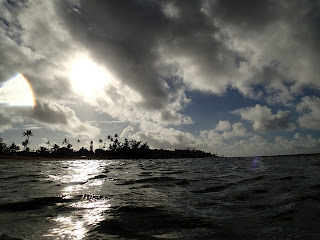 The clouds were blocking some of the sun, so it made a nice contrast...I like taking scenic shots from the water, as that's probably not the usual "postcard" photo. (And, off topic, but I give props to those folks who can photograph surfers!  Speed, timing, willingness to be out there in the waves.....yeeha!) 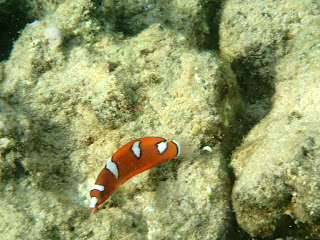 Still amazes me that this fish turns into a lovely fish with blue, red, and a yellow tail. Seems kinda mind boggling... 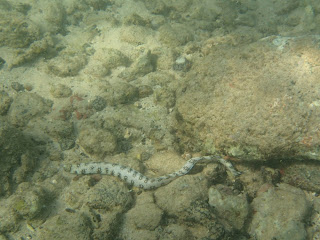 The Snowflake Moray Eel is probably the most prevalent eel that I see in these ponds.  Pretty non-threatening and never seems to be aggressive or assertive toward me. They do have cute yellow nostrils that come out of its head, in 2 tube-like things. I would say adorable, but what eel wants to be called adorable? They are all over trying to look vicious..And as I've often said, please don't try to be touching eels!  I really dislike those divers who insist on feeding eels. What happens to the next diver who has no food?

And I saw the same little wrasse that I saw yesterday: 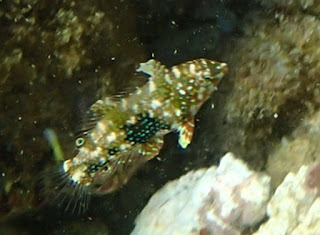 You can see some black with white dots in the middle...I'm thinking that might be its adult coloration.  I'll let you know.

Here's my pal, the Abudefduf: 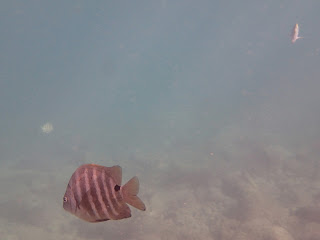 Really love these fish!  And they are usually in groups in this part of the ocean where I swim, so that's good.  Except for the running away part....

Saw 3 or 4 cowry shells that I didn't pick up.  One I was 95% sure was empty, but I really don't want to be wrong and take home a live shell. Speaking of that, look for the actual animal at the base of this Cowry shell: 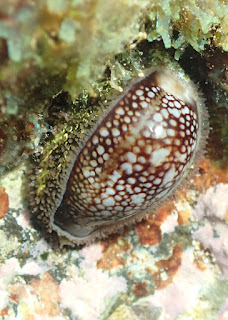 Cool, non?!  I have seen photos by others that show the animal entirely out and surrounding their own shell.  Very cool. I guess that's how they get the shell so shiny.

Another fave, the Ambon Puffer: 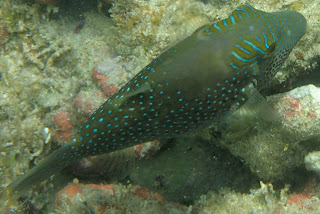 Don't you just love those colors and patterns?  But why do all the cool animals love to run away?  It's really hard to get any of them to stand still for a photo shoot.  Maybe they don't want to be photographed for someone's blog..

And the Rock Mover Wrasse. Very strong fish! The one below just picked up the rock you see near its head in this photo: 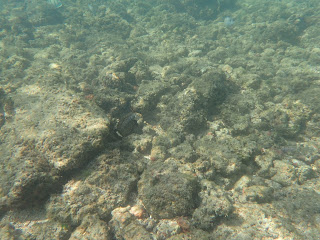 Oops.  Guess you'll need to click on it to see the fish. Here, let me help you: 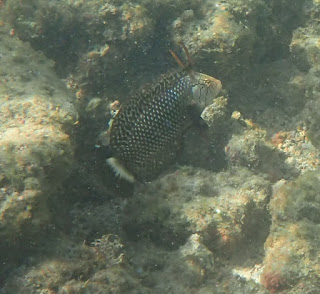 Same photo, just cropped out so you can see the fish more closely.  Pretty strong-mouthed!

The rock it moved was probably 7 times the size of its head.

And for Alex, the Box (Trunk) Fish: 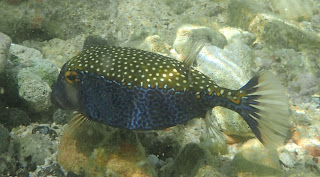 Lovely little male.  Nice patterns and coloration.  The female is all black with white spots. Both are pretty shy.  And I wasn't this close...this is a cropped photo.

A nice Drupe shell, with the pointy end still there...Sometimes it gets lopped off in the water. 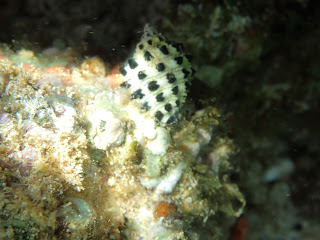 The diversity of shells really blows my mind.. 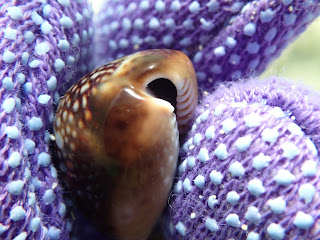 This is the end of the Cowry, where the animal can come out easily.  My gloved hand, too. I also caught a photo of the bottom opening, showing how sand can get caught in it: 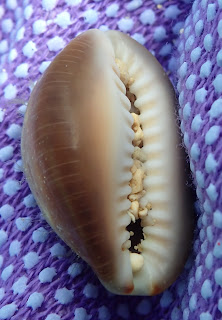 This was the one that was light, but still wasn't sure it was empty, so I put it back down.  As far as I know, the Cowry has no protective poisonous bite, so I'm not worried about picking them up.

And speaking of poison, some Wana 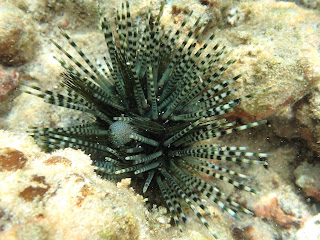 And a cute Hermit Crab in the horn shell: 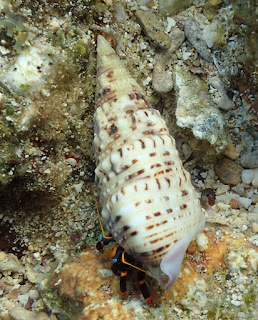 See the little orange legs?  and the blue eye stalks.  Very cool.  And again, very anxious to get away from me.  Why? I wondered, with all that protection?

And a crab that carried its protection with it: 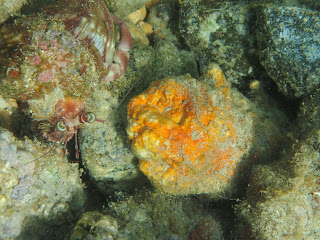 See the stalky eyes? Just to the left of the orange rock. This little guy ran away from me, but the video turned out kinda choppy.  My bad.

And the last palms: 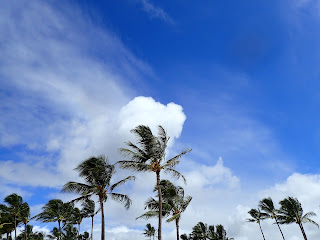 The weekend turns out packed, so I will probably have another report from today for you later...Oh and 2 seals!  The male was making those huffing noises, probably trying to impress the female.  But they were swimming in the Kiddie Pool and I was on the spit, so no good pix. I think they eventually swam off, as no seals were on the beach when I got out of the water...Glad they are still around, though..