Found some wonderful artsy books in the local library. One of them included all the paintings from the Louvre.  ALL. That's a lot of paintings.

As you probably know, many of the paintings of the world include Biblical themes.  One such painting was this one: 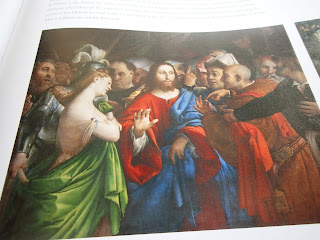 The Woman Caught in Adultery. I find the painting fascinating.  Look at all the faces: it seems they all have a different emotion.  You probably remember the Bible story, but Jesus comes upon a crowd that was about to fall upon a woman who had been caught in adultery.  Never mind the how was she caught.  Never mind the question of where was the man who was involved.  No, this scene focuses on Jesus coming to the aid of the woman. Jesus asked those assembled that he who is without sin throw the first stone.

8 But Jesus went to the Mount of Olives. 2 Early in the morning He came again into the temple, and all the people were coming to Him; and He sat down and began to teach them. 3 The scribes and the Pharisees *brought a woman caught in adultery, and having set her in the center of the court, 4 they *said to Him, “Teacher, this woman has been caught in adultery, in the very act. 5 Now in the Law Moses commanded us to stone such women; what then do You say?” 6 They were saying this, testing Him, so that they might have grounds for accusing Him. But Jesus stooped down and with His finger wrote on the ground. 7 But when they persisted in asking Him, He straightened up, and said to them, “He who is without sin among you, let him be the first to throw a stone at her.” 8 Again He stooped down and wrote on the ground. 9 When they heard it, they began to go out one by one, beginning with the older ones, and He was left alone, and the woman, where she was, in the center of the court. 10 Straightening up, Jesus said to her, “Woman, where are they? Did no one condemn you?” 11 She said, “No one, [a]Lord.” And Jesus said, “I do not condemn you, either. Go. From now on sin no more.”]
(From Biblegateway)

The painting conveys Jesus' wisdom and mercy. I think everyone learned from this.  And that was the point of paintings, that perhaps those people who didn't have the Bible to read might also learn the lessons from the paintings.

Another of my favorite Bible stories is the one about Queen Esther.  Think about story (and if you don't know it, Esther has her own Bible book.) Picture Esther in your mind, as she met with the King.  Did she look like this? 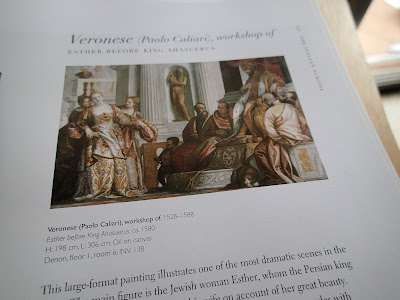 No, I don't think so!  I'm under the impression that sometimes stories were brought into the costumes of other, more modern times to make the scene more real to those seeing it.  I personally prefer that paintings be kept accurate to the time (and dress) of the actual story. Your mileage may vary.


And lastly, and I'm not saying this in a facetious way, but look at this painting: 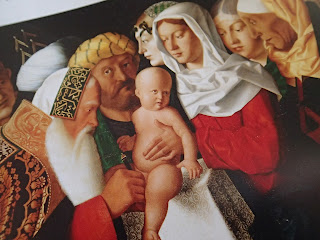 It is a painting of Jesus' circumcision.  Can you think of any circumcision that would cause your knife to tremble more?  To know you were about to cut on the Son of God? This occurred to me as I stared at this painting. It would be heavily on my mind who exactly I was about to cut. Of course, there were no women priests, so this wouldn't have been an issue.

Have a great Sunday. Listen and learn.