What a wonderful snorkel I had yesterday!  I took 493 photos, so was too tired after 2.5 hours of swimming to write a post yesterday. Whew!!! And aren't you glad I don't post all the photos?

Of the 493, I wrote down 40 photos that I thought should be brought to your attention.  Since my darling darling will probably wake up before I finish, there's a good chance that not all of these photos I've noted down will make it into the post.

It amazes me that the eye sees, but sometimes the camera doesn't catch a nuance in a photo. Like the Scorpion Fish: 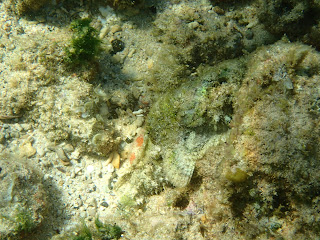 Kind of an Eagle Eye Challenge, right? It will help to click on the photo.  Then find the spread fin.  The tail is below the fin and the head is leaning against the rock. I took the photo and even I cannot really see the head, since it is so well camouflaged!


I was quite happy with the video because it shows the really cool colors that are usually hidden in these Devil Scorpion Fish.  Amazing, right?

The most amazing thing to me was the Monk Seal.  I got there in time to see her wriggling her way onto the beach.  The volunteers who put Stay Away signs up weren't there yet, so I enlisted the help of two visitors. They were happy to help put the signs on posts up a good distance away from the seal.  She settled in for a nap...and was still sleeping when I left 3 hours later.  The regular volunteers had arrived and signs with a rope between them were installed around the sleeping beauty. 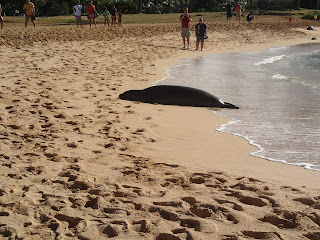 I didn't catch her wriggling onto the beach on video, but it was cute.  I'll try again next time.

So since she was napping, I was perplexed at first about how to enter the Kiddie Pond...she was sleeping pretty much where I normally enter.  So I finally decided to walk around her, giving her a wide swath of beach between us, and saw that the other entry points were rocky.  As you know, I don't enjoy entering water on anything but sand, since I have seen scorpion fish, shells and even octopus on that type of bottom.  So I continued around and entered in the real Kiddie Area.  And was thrilled to spot Octopus #2!  Just right there on a rock, in front of my face.  What a surprising treat. 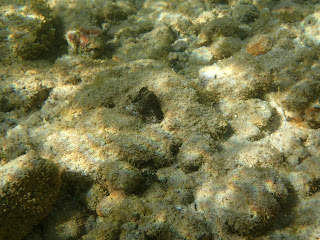 There it is, in the hole in that rock of coral.  Fantastique!!!  The little one sat still for my photos, too.  Yes, I would have probably preferred for it to move around, but then I would have had to follow it and probably scared it.  When I pray to see octopuses (yes, I think it's weird too...but God does provide), I also pray not to particularly bother them.  What's cool is that they totally see me there.  Sometimes they shrink down, and sometimes they just freeze, hoping I'll go away!

So the other highlights were the Trunk Fish: 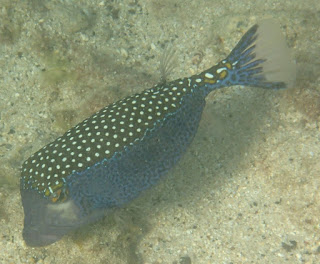 Very nice colors, this is the male, but they do love to swim quickly away.  I do very little talking when I'm snorkeling, so I know it wasn't something I said.

And here's a new little fish that was hiding underneath a rocky ledge.  I'll bet it's a wrasse, but I've never seen it before: 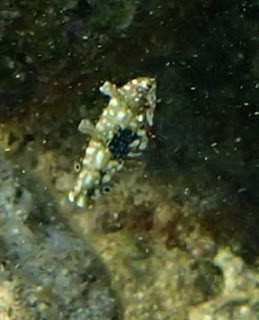 The two little fins sticking up are interesting, as are the dots on each side, near the tail.  This is a cropped photo; it was maybe 2 inches long, all told.

The Rock Mover wrasses were also in attendance.  I'm seeing bigger ones here in Poipu.  In Hanauma Bay on Oahu, I usually saw the younger versions.  Doesn't it look like a painted clown face? 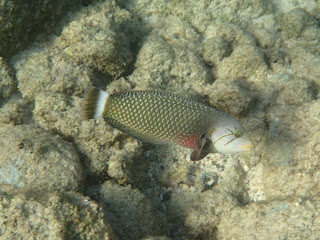 These are the fish that pick up rocks and throw them around, looking for food underneath.  It is fun to watch them do this; they must have jaws of steel.  I saw this one pick up a rock about the size of its head....and toss it over onto another part of the bottom.


Here's a Cowry shell that is hiding pretty well. There's some kind of tube near it, which I'll bet it uses for protection in its hidey hole..This is a macro shot (shout out to Olympus TG2). Really lets you get in close. 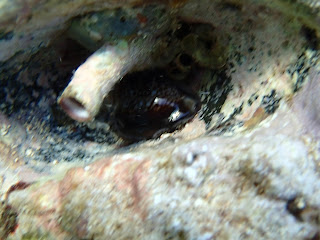 But you do have to be still long enough for the focus to adjust...a problem sometimes when I'm diving down to get the shot.

The drupe family of shells really interests me...this is the first one I've seen that is mostly light colored: 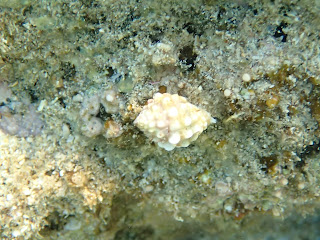 Usually, they have dark spots on a white background.  If I were better organized, I'd show you one I took months ago that show the pretty purple "mouth" of the shell.  But it's stored somewhere on my Goflex drive. Perhaps when I retire, I'll have time to sort through and compile all the best shots.  And now that I mention that, I wonder what the underside of this shell would have looked like?  But since it was alive, apparently, I didn't want to move it. 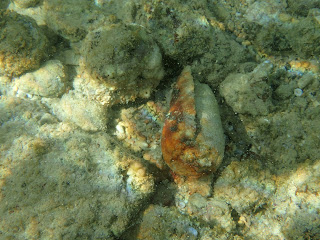 Not so with this Cone Shell...I couldn't resist turning it over. The other side was boring white.  It must have been in the water quite a long time, as it had lots of gunk on it.  But the shape is a dead giveaway, so I turned it over gently, from the fat end...
Pretty sure it was still alive.  And a poisonous predator! 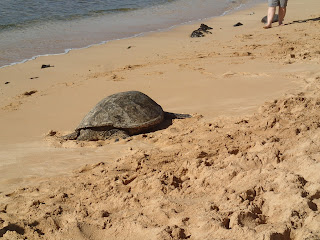 Eventually, the turtle (Honu) did wend its way back into the water...beleaguered by tourists taking its photo from the water in front of it.  They were unclear on the concept...

To interrupt the swim just for a moment.  Well, perhaps a couple of moments...

You may recall that I am collecting opercula..this is the cool little hard construction that blocks the entry to shells like the Turban Shell.  Protecting it, I can only imagine.  Well, here's my pile of opercula: 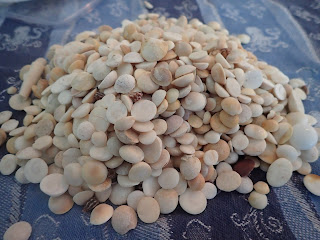 I also took photos of some of the operculum close up... Yes, there are a few in my collection...


Close up, you can see their cool whirly circle on the bottom. 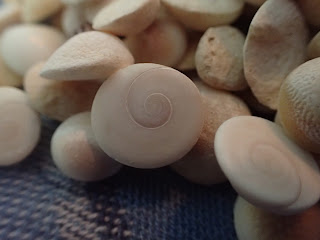 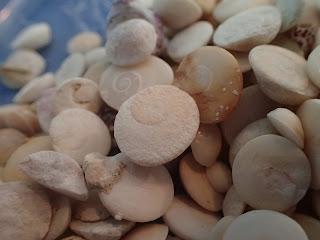 and also how some are in pristine condition and


others aren't. Note the cool "bubbling" on the orange one. 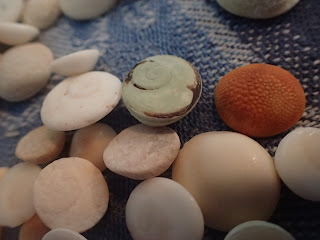 Some are smooth and shiny, and others, not. 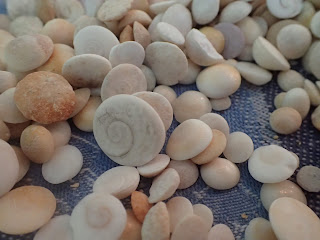 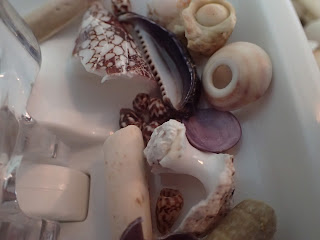 Above is one still in the shell....somehow, it has stayed in there, even though the other side is empty. 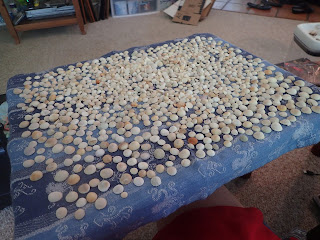 And, la piece de resistance, the entire collection spread out on my octopus dish cloth! Thanks, Maria!


(And since I couldn't find the symbols for text, the PIECE above normally has an accent over the first e...say it pea-ess...)


Yes, that might be too much emphasis on opercula...but I do think they are majorly cool...

OK, back to the beach.  In our next episode, there was a cool shell, which turned out to have a Hermit Crab in it: 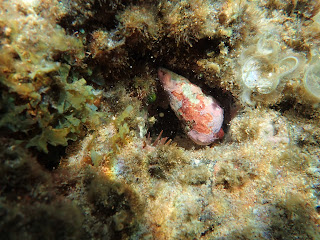 The shell wasn't in pristine condition, but I didn't see the little legs of the crab until I got the photo home...
A similar but different shell does show the Hermit Crab a bit better: 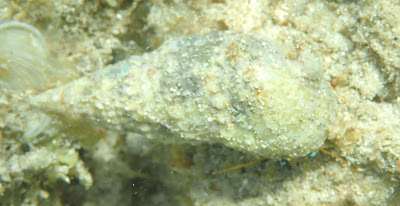 See the blue eyes and two orange legs at the bottom of the shell?  Must be a really heavy load for the crab to carry, but the protection is worth it..I hope.

Flounder was found on top of a rock.  A rather unusual placement, but it stayed there.  Maybe my sneaky Ninja skills are being honed...It did watch me, rolling the one eye that was visible from this side. 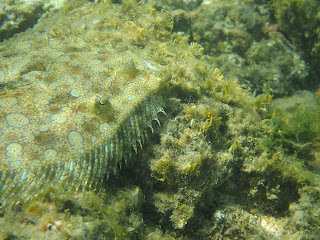 Their eyes actually start off one on each side, but as the fish matures, the 2nd eye migrates to the top of its head.  What a cool creation that is! (Thanks, God.  We know you're behind all this coolness...)


And last but not least, because breakfast bacon is calling me, the little Snowflake Eel: 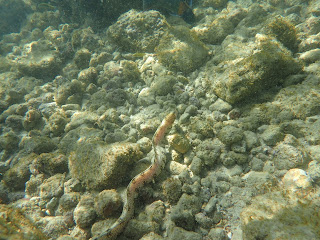 The photo appeals to me because of the lighting on the little guy, showing up parts of his snakey length...

So that's it for this post!  I didn't use all 40 photos, but enough, right? Such a great dive and I thank God not only for His provision, but also safety.  I could easily have put my hand down on that Scorpion Fish when going for an operculum on the bottom....Point to ponder for future dives, to look REALLY carefully before putting even a gloved hand down on the ocean floor..