"Lay down next to heeeemmmm!"

This morning I treated myself, again, to a swim down south in Poipu.  Good choice! My hubby is a very understanding man and doesn't mind the gas used to get down there from our home in Lihue.

I ran into my friend Royden, and he and I stayed on the beach talking story.  Then I noticed the Monk Seal, swimming just off shore.

Royden, born on Kauai, said "Lay down on the beach next to heeemmm!  He will come lay down near you!!!!"

But that didn't stop me from taking a few pix. 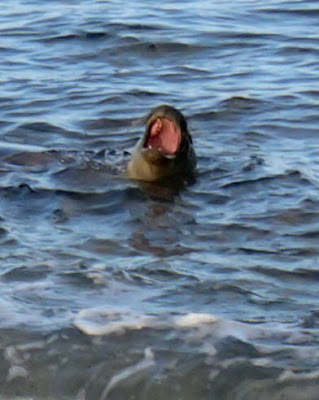 He was making some seal noises, so I definitely didn't get close.  In fact, this photo is blown up a bazillion times to show his open mouth.

Here he is, coasting near the shoreline.

Personally, I think he wanted us to go away so he could come in.
He eventually went to the spit and wiggled across and went into the "kiddie" pool.  Ahla!  It was shallower in there.  Not sure where he went after that.  But there was also a huge turtle on the beach taking a nap later. 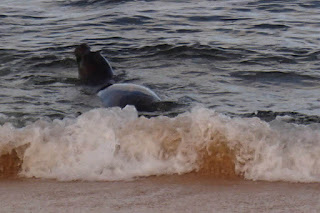 A great day, even from the beach!

But of course, I got into the water...and saw 2 octopuses.  Small ones, hiding in a hole in the bottom.  (Not together, either....mostly they are individual animals....I'll tell you about their cannibalistic tendencies in another post.) 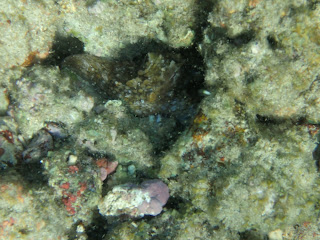 The octopus is in the middle, above the lavender and white rock.  You can see its eyes and a bit of leg. I'm told you can click on the photo to enlarge it.

Now I'm asking you, seriously: Here on Kauai, one is allowed to take animals and eat them.  Yeah, even octopus! I know.  Can you believe?!?!  So if you see any, please don't catch and eat them.  They are waaaay too cool to eat.  And yes, I know I have a hard row to hoe on this in Hawaii.  Seems like everyone thinks they taste great.  Well, everyone but me and my peeps... 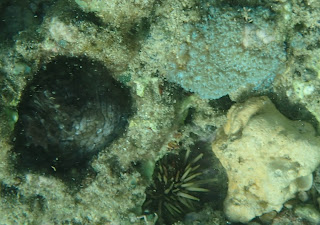 Should I make it an Eagle Eye challenge?  It is kinda hard to see.....
And you'll definitely be able to make out more parts when enlarged.

It is interesting to me that seeing an octopus changes the whole dive. You might think it odd, but I always pray for safety and seeing all of God's cool creations, but especially an octopus.  I'm smiling now, thinking about how I used to tell God I don't really care if I see an octopus.  Man, could He ever tell I was lying!!!

So today, after seeing 4 maybe 5 on Saturday and NONE yesterday, you can imagine that I was praying really hard and really truthfully.  I asked God several times if there were any octopuses and if there were, would He please guide me to seeing them.  Then after asking a few times in my mind, I saw the first one.  Really, the first one is the bomb!  Even just one is great.  But two is better!  and I saw the 2nd one only a few minutes after the first.
So, a good day of swimming, in both ponds. After all, if the seal needed to use both, so did I. HA.

Rain further along the coast: 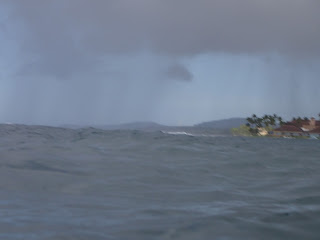 I didn't see any rainbows today, but I enjoyed seeing the rain.  It rained a bit on me as I was driving down south, but not while I was swimming. Not that it would have majorly bothered me: after all, I'm already wet when when swimming! BUT, the difference in the light can be a problem.  Since I'm taking pictures, some of them don't turn out very well in the lower light. 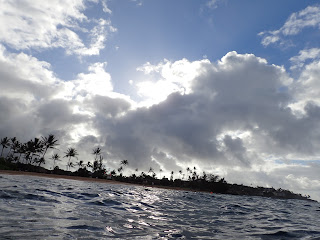 I DO love the clouds and the sun behind them. Oh and the palm trees. Kauai is lovely. If you haven't visited yet, please do!  We tend to be nicer while we are here (unless sometimes in the car......my friend tells me I lived on Oahu too long..).  I helped a visitor yesterday.  She was standing in the water, having put on one fin and was struggling with whether to put on the other or to put on the mask and snorkel.  I advised her to put on the breathing gear first: that way if she falls over, she'll still be able to breathe!  She thanked me.

On a previous visit, I was laughing while watching a young lady who was valiantly trying to walk into the shore, while still wearing her fins!  I told her it was easier if she walks in backward.  But really, taking OFF the fins and coming in is even easier! 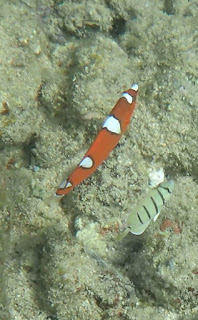 The orange and white fish above is the juvenile of the Yellow Tail Coris.  Can you believe?!
The adult ends up with the yellow tail, blue spots on the latter third of the body and pretty orange, green and pink-ish colors on the mouth half. Isn't God amazing?  Who else would think up that crazy cool diversity?! (And don't try to tell me Darwin....I'm not buyin' it.) 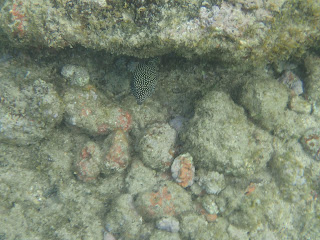 And for my hubby, the box fish.  AKA trunkfish.  Love these little guys, but have a hard time "catching" them in a photo.  They are quick and shy!

The Lizard Fish, on the contrary, just sits and awaits prey: 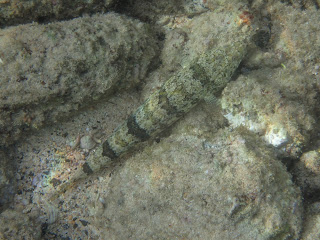 Ole Red Eyes..... This fish never moved.  As far as I can tell, never even thought of moving! Some of these animals have wicked self control.

And one from yesterday. This one will be obvious to you all, probably, but it puzzled me for quite a while yesterday: 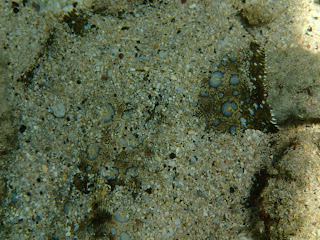 I saw the Peacock flounder pattern on the right.  But it looked like it was adhered to that rock.  I could NOT figure out what happened to make this image.  Then I got it: the spots you can see on the right were in fact the right side of the flounder.  But the entire remainder of the fish was buried in the sand. Incroyable!!  Magnifique! (That's for my friend, Marion, in France....)

What great camou, right? In fact, in this photo, the fish takes up most of the image....It kept so still, I want to go inquire if the flounder are related in some way to lizard fish.  Doubt it, but if we make a list of all I don't know, we'll be busy for a while...  A L-O-N-G while. Just sayin'.

And that makes me think there might have been another photo or two from yesterday that I want to include.  I'll be right back...

OK, I'm back.  and there WERE more interesting creatures:
Still trying to get a great shot of Needlefish. Here's the latest attempt: 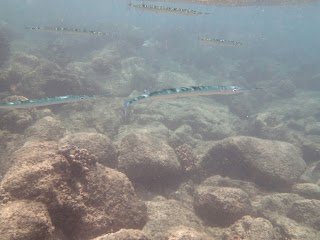 These little guys cruise near the surface, which is part of why it's hard to catch them with my camera. But the great thing I noticed today is that the light reflects on their top half, with cool dappled patterns, but their bottom half remains silvery.  Probably harder for a predator to catch a glimpse of, from below.  They, like the octopus, do focus on you.  You def get a feeling of interaction.

And may I just interject here?  PLEASE do not feed the fish!  God gives them all they need.  But also, feeding just makes them clump all up around you.  Then they swarm around the next unsuspecting person, begging for a treat.  WHY, oh Why does anyone need to feed?  There are plenty of fish in the sea, so why does anyone need to trick them into coming around?  After all, what happens after you go home and no one feeds them?  Or what happens if the sharks figure out there's a great place to find good groups of damsel fish? I don't want to be around for that event.

And yes, to answer your unasked question, I have seen five sharks since I've been diving (for over 20 years) in Hawaii.  About 6 times. But, NONE of them has ever bothered me.  Not even the 2 black tip sharks that swam by me in Hanauma Bay years ago.  They just cruised by, and couldn't care less about me being there.  But that doesn't mean I take that safety for granted!  In fact, I ask GOD for safety before every dive.  I do NOT ask for trouble.  God has seen fit to protect me and I am thankful.  Especially since I am usually diving on my own, admittedly not the smartest thing.  And that's compounded by loving to get in the water early, in this case, at 7 a.m., when there's apparently more of a chance to see the remaining overnight predators! That's one of the many reasons I don't swim at night.  Too many critters who can surprise you.

Especially since I seem to see a lot of eels.  They hunt at night, mainly, I'm told, so they're more out and about then. 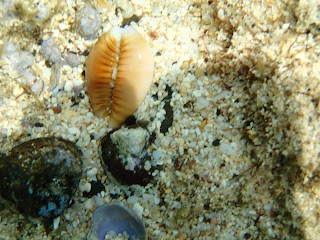 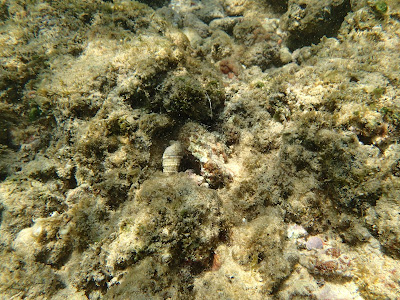 The shell to the left, possibly a false auger, is in the center.  These are lovely shells, with delicate lines around the outside and nice, muted colors.

I always assume if they're in good shape that they are still occupied, so I didn't collect this one. Not even tempted. 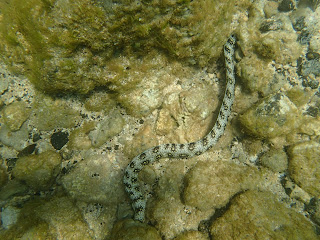 These little snowflake moray eels, about as big around as my thumb, are so numerous lately that I sometimes forget to mention them.  Cool animals, though, and pretty mellow.  They rarely make like they'd enjoy biting me.

And an Eagle Eye Challenge: 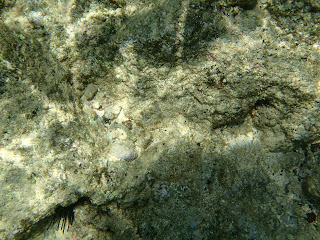 For those of you not familiar with the Eagle Eye Challenge, I occasionally insert pix of hard-to-see animals (like octopuses aren't enough! HA). This one is a ....wait for it!....little Goby. Yes, I know it's hard to see, but that's the point.  Trying to train your eye to catch the little things that make the ocean so cool. Mostly, I look for movement.  That's why the clumps of moving seaweed trick me sometimes over here..

If you enjoy seeing God's great fishes, clouds, octopuses and palm trees, tell your friends who might also enjoy!  Just another way to appreciate all God gives us...