Seal swam by twice! and Octo-sighting!!! 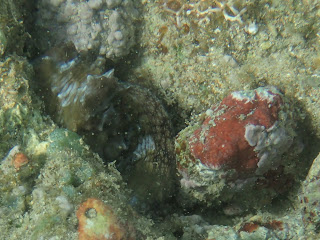 You know I was so thankful I almost cried when I swam upon this small octopus!

I had come up empty on my last two snorkels, so I thought maybe I had lost my touch. But I had just prayed that God would show me octopuses in HIS timing, and then there it was!

I was thankful also for the red rock...it's easier to see them if they are near something bright. Not sure why. But this little guy totally saw me and eventually withdrew in the little den underneath. YAY GOD!

You will possibly think I'm a goofball, but I'm happy to see an octopus again, so ...

Also I saw fish "running" and when that happens I always flip around to try to discern what they are running from. (In case it's a shark!) But in this case, it was a big monk seal. He swam by me and came up for air just as I was popping up to see where he went. The odd thing is that he came back about 10 minutes later, going in toward the beach. A beach-goer with gloves on waved at the seal. Needless to say, it didn't wave back. It didn't come up on the beach however, so I lost track of where he went. Nice to see it, though. (See photos below.) 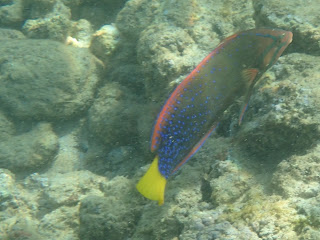 So this is the adult and below is the juvenile of the Yellow Tailed Coris. Isn't that crazy how different they are? 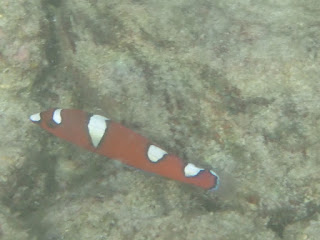 Cone shell, minding its own business. I think they are night-time hunters.. 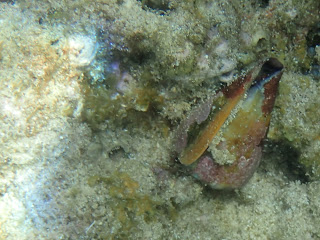 I think the Cowry (below) hunts at night too. Maybe someday I'll get up the nerve and find a dive partner to go at night. Might even see a night hunting octopus! 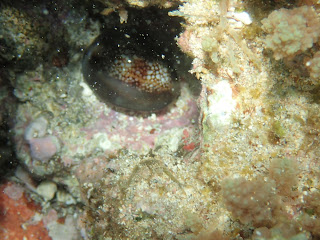 The Leaf Fish wasn't out very far...leaning against the rock in a surge-y area. 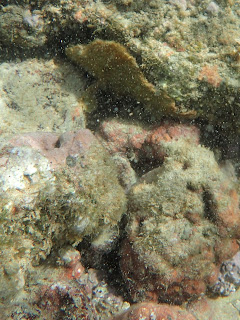 This is the plastic thing I've devised to wrap fishing line around when I find it. Otherwise, it gets tangled in the zipper on the dive bag. 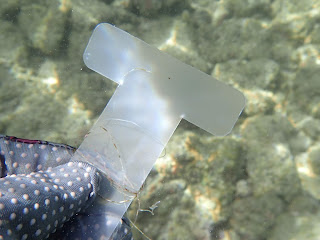 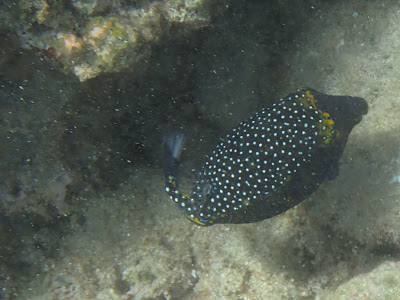 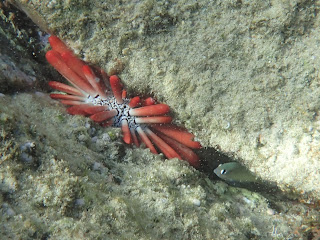 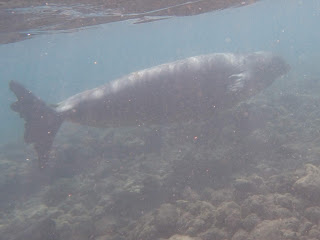 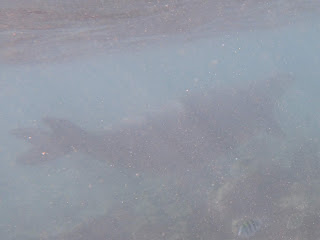 The 2nd pic is as he was swimming away. I think it's important to note that they are ATHLETES!!! They are not at all the clumsy animals you see coming up on the beach. No, the ocean is their element and they are quite awe inspiring when they swim past you! Not only because of their smooth and apparently effortless swimming, but just their size. This one was easily a foot longer than I am. They always look at me, too, which is sometimes a bit intimidating.


Top shell. Look closely...there is a Hermit crab antenna at the bottom of the shell on the left. And an operculum above (that white thing) 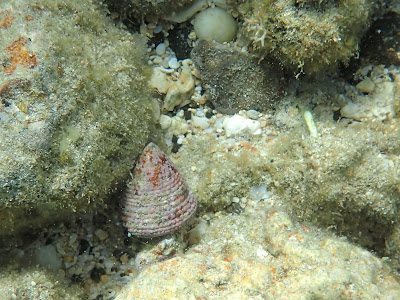 Below, the Turban Shell.  This was alive, I suspect, so I didn't even bother picking it up. This is the shell that has an operculum.....those are what I collect.. 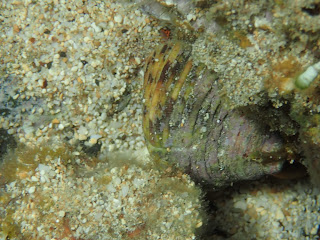 A very nice swim....quite thankful to have seen an octopus.
Posted by octopigirl7 at 4:10 PM