The operculum that I didn't take home

You know that if I didn't collect an operculum when I saw it, there was a darned good reason. 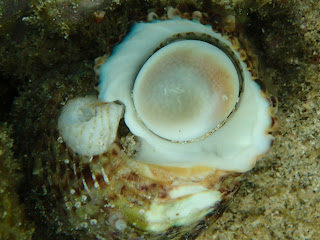 In this case, it was because it was still in use.
Yes, kids, this is what an operculum looks like when it is helping to close the hole in the shell. Cool, right?!
And I saw 4 octopuses....and boy, were those waves kicking!  The wind had picked up. When I got in at 11:45 a.m., no one else was in the big pond.  That tells you that it wasn't the best time for swimming. It also tells you it's SuperBowl Sunday, but like I would care about that...But the waves didn't deter me.  I went in, thinking that I would look for some octopuses in the place I saw one yesterday and then if the water was mean, I'd get out. 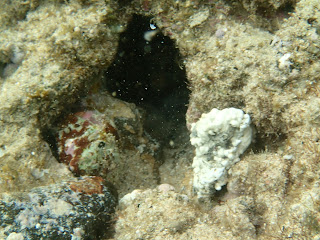 Yes, the octopus is really in there.  You can just barely see the siphon.  It was hiding really well.  The only reason I saw it was that I had noted the den yesterday when I saw the octopus for the 1st time.  So knew where to look today. The other good thing was that I saw it pretty quickly after getting in. The octopus is the brown bit....you can see its eye if you look closely.

There was a really nice white shell too: 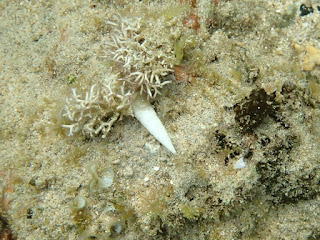 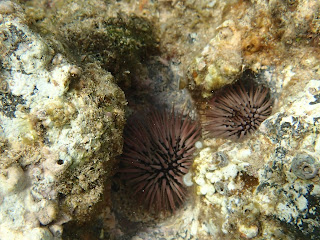 I warn people not to touch these, but I've been quite fortunate in not having ever pressed against them.  As you can see, quite spikey! 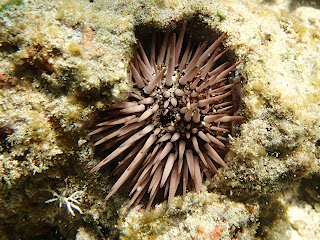 I had hoped this photo would show you more of the design...They are actually quite pretty, especially in the area where their spikes have broken off.
Octopus #3: 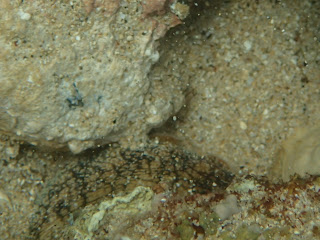 Mind you, I never said it would be easy to see them! If it were easy, that'd take away some of the fun.  That's the octopus in the center to lower left of the photo.  Just his arms showing.
And what I thought was just a cowry shell hiding, turned out to be two cowries and a pencil urchin! 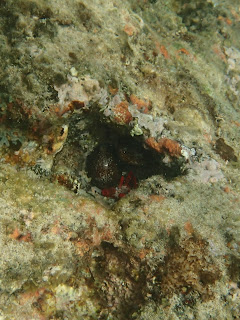 Yes, as I've said, one never knows what's on the camera until one gets it home.
I think the pencil urchins are very cute...red, too.
Today's Leaf Fish was brown...looked very like brown seaweed: 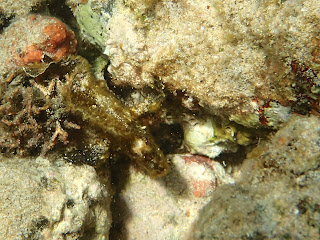 His/her nose is on the rock in the middle.
The rest of the fish is above the nose.  One leg is leaning on a rock on each side.  I guess it keeps them stable, to lean like that.
A small but pretty Drupe shell: 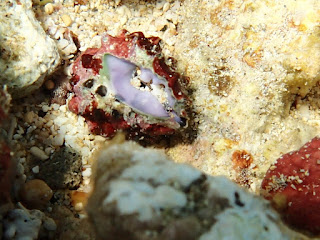 Might be one of those cranberry ones.  But the purple inside is indicative of this type of shell.  I shall have to find one of mine from when I collected shells, so I can show you better.  It's really one of God's lovely creations.
I saw another nudibranch.  I'm certainly no expert in this type of invertebrate, but it seemed different than the Spanish Dancer that I saw not too long ago.  I will look it up after I eat.  2 and a half hours of swimming really takes it outa you!
And even though I looked, I didn't see those green Scorpion Fish that I saw yesterday. (Apparently, their disguise was really working today.)  But I did see a Spotfin Scorpion: 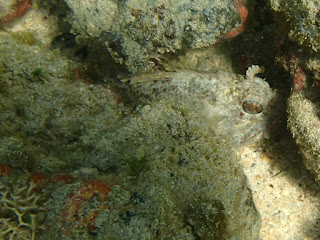 The fish's eye is visible, as is its "eyebrow", a bit floating up over the eye, kinda like seaweed.  It wasn't too happy that I was intruding, especially since it was on the bottom surrounded by a bunch of rocks.  I'll bet it thought it was invisible. HAH.
And octopus #4: 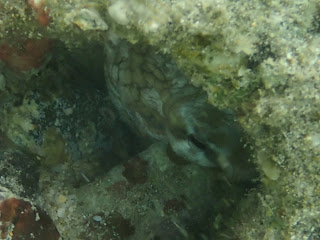 Its eye and part of its body is showing.  I was lucky to get that much as it was really hiding well.  This was a pretty small one that disappeared into its den immediately upon seeing me.  Really, I can be fun ... but not, apparently, to an octopus.  I am so thankful to have seen 4 of these guys today.  And I collected 94 opercula...ones that weren't being used, of course.

So the odd thing about today was that at church, a different one than is my usual, I met a lot of nice people.  And during the service, an older gentleman had some sort of fainting spell.  So people gathered around and prayed for him, while someone else called the EMTs.  Seemed like no time at all when they got to the church and took care of him. That was a first for me!  Just glad we were a praying group...
And that God listens. Have a great week!