Good week: tiring but worth it! 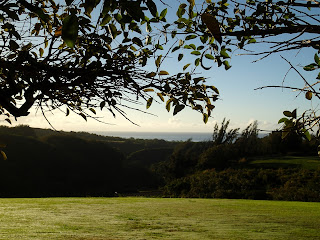 Who wouldn't want to come to work, when the view nearby is this nice? It's the lovely National Tropical Botanical Garden. And that's not all: There are also many wonderful songbirds that accompany me as I walk around. White Rumped Shama, Francolin, I think I even saw a Mockingbird. Of course, there are also the usual suspects: sparrows, Japanese White Eyes, and even a few Common Mynah.  Ahh....
And I mustn't forget what is probably the most prevalent bird on the island: 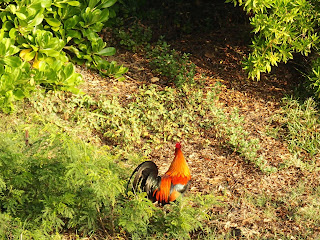 Mr. Rooster.  And the time of day doesn't matter: it crows just to show that it can.  And I always tell it: I'm awake already!


But let's go underwater at Poipu: 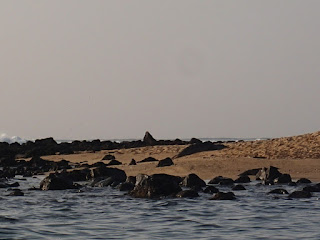 The seal was napping.
It's the longest "rock" on this part of the spit.. 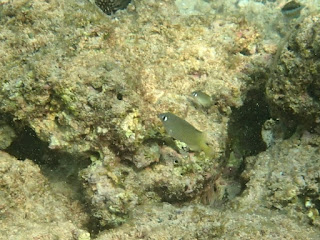 There were quite of few tiny Brighteye Chromis today...look for the 2nd, smaller one above the "big" one...All told, these adults are probably only about an inch and a half..The little guy is about the size of my pinkie fingernail. And all are very quick.  I was fortunate to catch both in one shot.  They are even looking in the same direction. 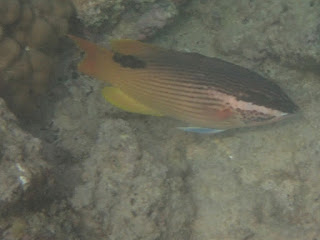 Like many of its cousins, the Hawaiian Hogfish quickly darts around the reef.  I'm not sure what they eat, but I do like the color patterns..
Today, I was able to spot two octopuses: 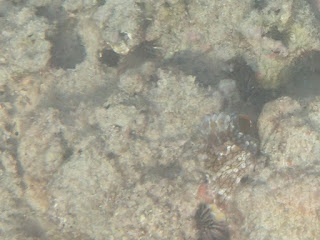 Look for the brown and white speckles...that's it.  Both the octopuses that I saw were very shy.  No surprise there... 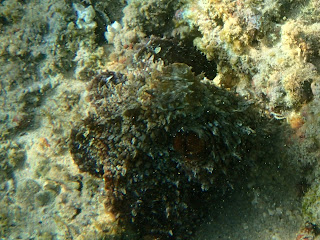 Click on the photo.
You will be able to see the eye, with the white lines radiating out from it. 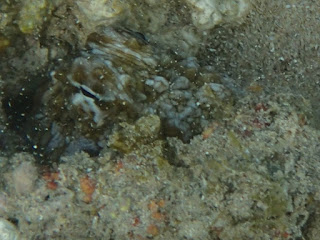 You can definitely see the eye in the picture to the right..and the sand that was in the water.  The octopus was hunkered down, trying to disappear.  I can only imagine how huge I must appear to the poor thing. 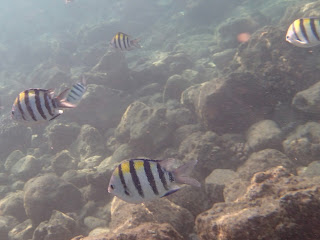 These Indo Pacific Damsels look so cheery.  They are usually in groups.  And they don't seem very scared of me, so they often come quite close.
As opposed to the Peacock Grouper, which hides under rocks.  I don't often see the large adults, but just these little guys. 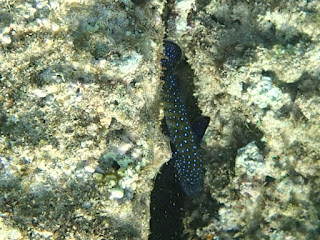 The blue is my favorite color.
Apparently, they aren't very nice fish, though. They scour the reef, bullying everyone else for food. 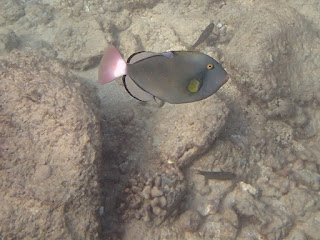 The Pinktail Durgon showed all its attributes in this photo...beautiful but they don't seem to interact with me.  At least, not as the octopus does.  This one was accompanied by a couple of other adults, but they weren't in one frame, so I didn't get a group shot.
Always happy to see the Rock Mover Wrasse...for some reason, on Kauai, at least at Poipu, this wrasse is often associated with an octopus.  So once I see this wrasse, I become immediately hopeful that there's an octopus nearby.  (And there was...but I already showed you its photo.) 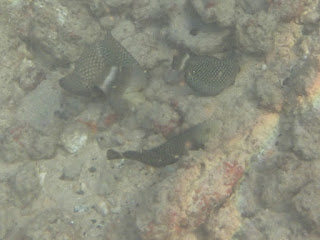 There are actually 3 of the wrasses in this shot.  It was a bit too deep for an excellent photo, but it was rather rare to find 3 in one are, so I'm including it anyway. They were going about their work, turning over rocks to look for food. 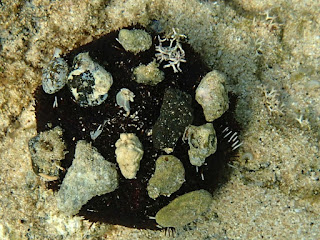 It always cracks me up to see how many objects these urchins attach to their exterior.  Protection, I guess.
And a very tiny shell: 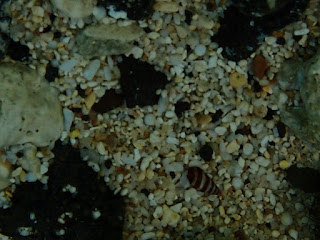 See it?  The striped one, on top of all the sand.
And because he asked, here's a Trunk Fish for Alex: 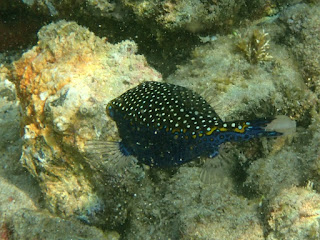 If you look closely at the male at the upper left of his body, you can see its bulging eye. I do love the colors and the patterns. 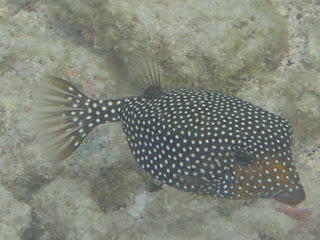 The face.
This is another Trunk Fish that I found later.  It's unusual for me to be able to see them head on, as they always run away when they see me.
And also for Alex, a Lizard Fish 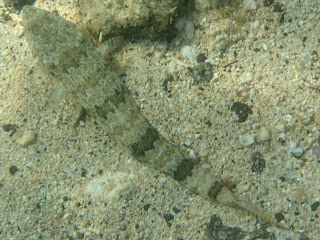 The one just lay there...it was already partially buried in the sand. This is why I have to be careful when I pick up glass or operculum from the bottom.  I have disturbed some Lizard Fish in the past. 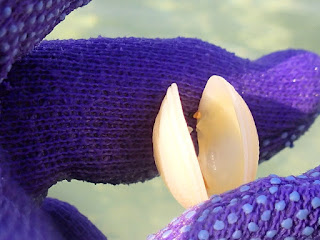 Aren't my gardening gloves lovely? HA.  I wear only the one.  Here, I found an intact 2 part shell that was apparently empty.  Normally that's my cue to bring it home, but this one seemed as if someone could make a home in it, so I left it in the water. 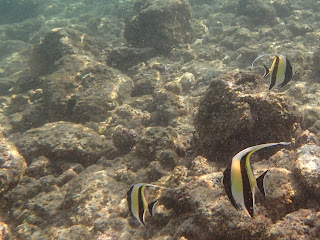 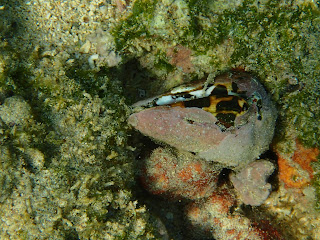 Cone Shell with sea gunk on it.  That's a scientific term. 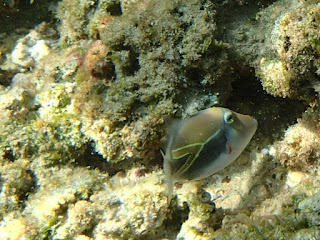 A little Humu.  Maybe about 3 inches long, tip to tail.  Very cute and quite interested in hiding from me.  This one was about a second from darting into the hole in front of it.  And yes, i know the longer Hawaiian name...but Humu is easier.  Don't tell the Hawaiians!
Here's its bigger cousin, accompanied by a Christmas Wrasse: 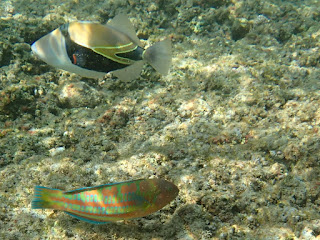 In the following picture, one had flipped around and they were both going in the same direction.  But I liked the sun on these two. 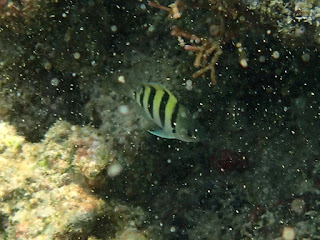 It's a Sergeant Major fish; I like to call it a Sergeant Minor, though, because of its diminutive size!
And no dive would be complete without the requisite Snowflake Moray.  I don't think this one even knew I was there, as it was wholly involved in trying to eat something hidden under the rocks: 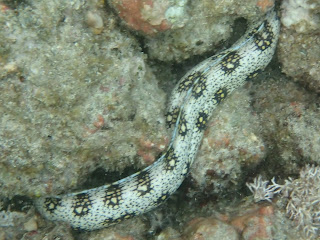 These Electric Blue Crabs are the most prevalent crab I see in the small pond at Poipu. I didn't realize there were two until I got the pictures home: 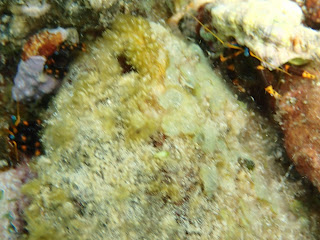 And now that I'm looking again, I think there are 3!!! The legs crack me up: bright orange with spots. And their blue eye stalks are cool, too.
And in this shot, the crab not only was using the Turban shell as a home, but it also had part of a Cowry shell as further armor. 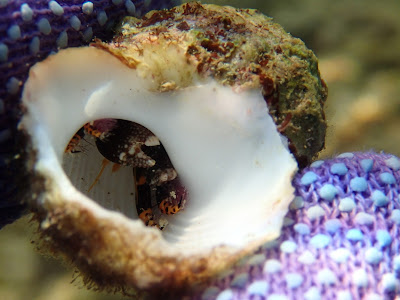 Another shell that I couldn't bring home. Drat!
And last but not least of the Cowry shells: 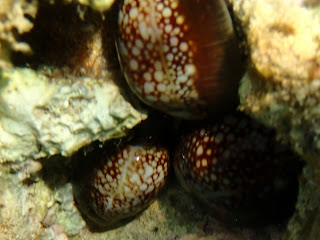 It fascinates me that they group together like this.  I wonder if it's for protection of just because they're being chummy with their own kind. 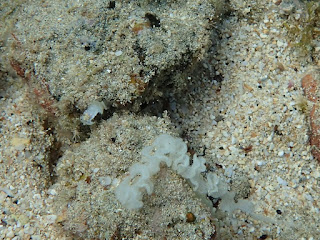 This string of white I think might be some kind of eggs..I know some shells do this.
The rooster in my area at home is crowing now.  Must be time to sign off.  Thanks for reading!
Posted by octopigirl7 at 7:05 PM