A visiting gentleman helped me

A visiting gentleman helped me put the signs up today, when I noticed another seal on the beach. 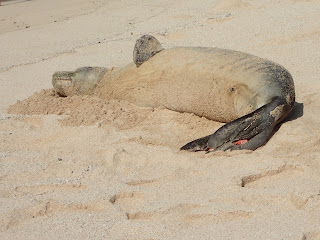 Yes, he was snoozing.  And yes, in this case, I know it was a male because when the volunteer showed up (the REAL volunteer), she told me the number of the seal and that it was a male.  Oy, so cute. And it had at least a 3 hour nap.  I know because that's how long the swim took me today.  Two hours in the Big Pond and one in the Kiddie Pond.  Two octopuses in the Big Pond and one in the Kiddie...coincidence?!
A really wonderful snorkel today, too.  After praying, I got in and immediately found a floundah.. 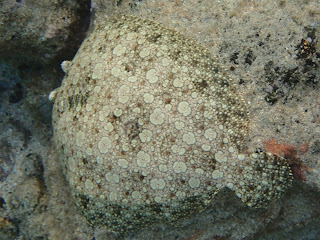 I like this shot because since the flounder was bent over the top of a rock, you can see its eyes.  Pretty amazing.  And sorry if you already know this, but they are apparently born with one eye on each side and then as they grow, one eye migrates.  That is SO cool and a great plan.  Thanks, God! He has great ideas...
There were many cool fish.  And 3 cool octofishes! Sadly, they once again were experts at hiding.  One more than the others, but.... 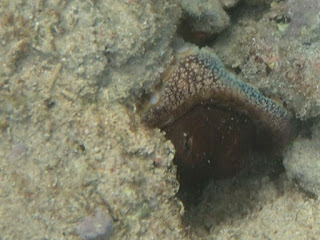 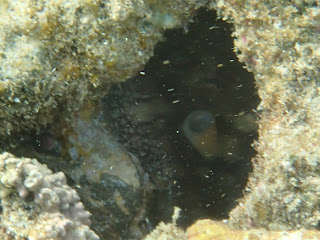 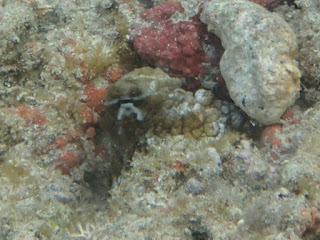 Normally, I try to mash some words in between octopuses, but really: why?  They are so cool, they speak for themselves.  Well, kinda.
The octopus on top of the trio did turn a darker brown when I swooped down to take its photo.  Guess it was kinda shy.  Or perhaps it was just upset because it didn't know I was there, until I got closer.  When the water is deep, I can be Ninja snorkeler...no one sees me.
Very thankful for the octopuses.  It makes my day. (YAY, GOD!) 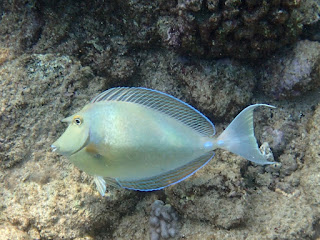 These fish are so plentiful that I rarely note them.  But this one showed all its nice colors and fins, so I am including it, for its beauty and well, just the dang coolness!  After all, how often does one see a unicorn?!
There was also a cleaning station: 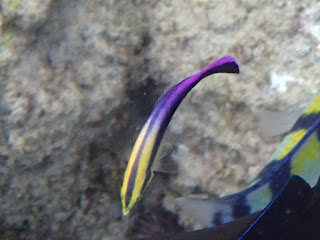 This is the little fish that helps so many fish out; it eats the parasites and bacteria.  I even saw it nibbling on the inside of the gills of a Rock Mover.
And speaking of the Rock Mover: I didn't see ANY until about an hour and a half into the swim.  I thought it very odd.  Usually, I like to see them because octopuses are often associated with them.  But once I saw one, it was like a hole was unplugged and there were many more.
I also saw octopus ink! Not something I see very often, but once you've seen it, you definitely recognize it. I didn't touch this time, but when I did, years ago, it feels quite viscous, kinda like oil... 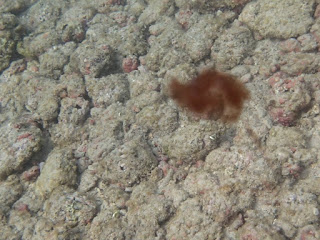 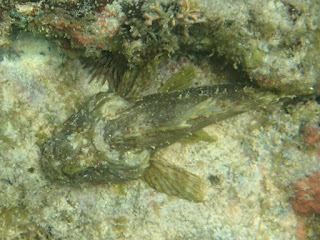 It just floats by you in the water, so once I saw the first string, I looked for the octopus.  I'm not sure if octopus #3 was the inker, but I was sure it wasn't me who caused it!  Once I was in the stream, it was coming from ahead of me.  Someone else had scared it.  It was kinda timid, and young, so perhaps that's why it freaked out.
I saw 3 types of Scorpion fish:
Spotfin: look left!

Yes, they are really ugly fish!  And the poison is quite a deterrent.  I wouldn't think of touching one! Thankfully, they normally hide under rocky outcrops, so it's not usually an issue for swimmers...or walkers.  Not to get on a soap box, but why would you come to the beach and just walk in the water?  ALL the fun stuff is underneath in the water...
There were also two green scorpion fish.  Quite a surprise.  I don't believe I'd seen any quite this color. 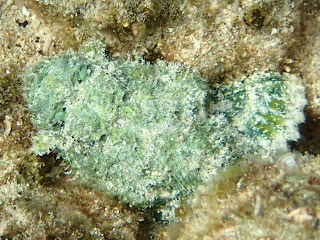 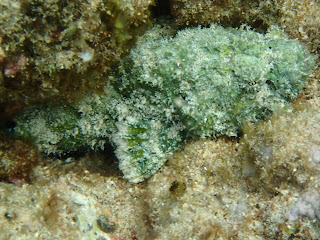 And its cousin, the Leaf Fish.  This one was black.  Quite unusual, at least in my experience. 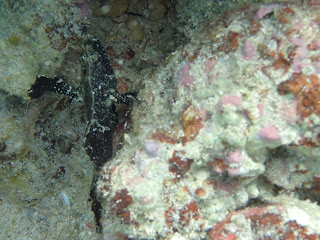 You might have to really look, but it puts its side fins on each side of the rock.  They really do look like leaves...it's kinda freaky, but an excellent camouflage.  Unless, of course, you are expecting to see them...I do not know if they also have poison.  Something to investigate...
The 2nd green scorp, yes there were suddenly two!, looked like this: 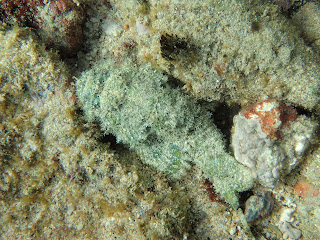 The 2nd one was a different shade of green. I thought it was so odd to see two in one day, especially since I had never seen this coloration in a Scorp before, so I looked for more, but didn't see a third.
And lest you think I don't see shells, well... 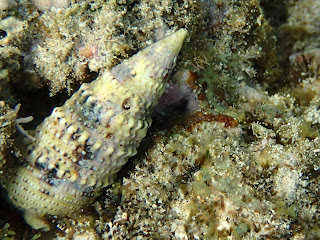 Lovely, right?!  But note the little hole...i don't know if someone was attempting to eat this shell (e.g., octopus), but I hope it wasn't successful.  I'm not sure what an octo-hole looks like in a shell....
I will end with sunrise and palms: 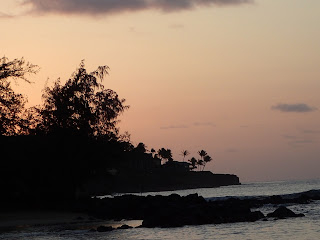 And later, in addition to this pretty, there were dolphins swimming just offshore.  Dolphins, seal and turtle.  What more could a girl want?  Well, perhaps a whale, which didn't show itself to me.. 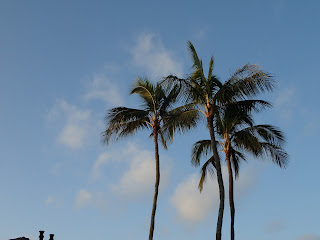 And I almost forgot the cute little box fish for Alex: 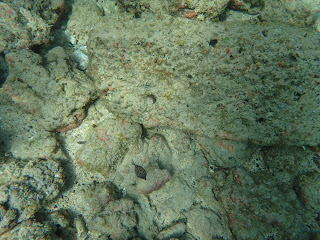 What a cutie!  Probably two inches all told, including tail.  It was terrified of me!  Kept trying to escape.  So I left it alone.  After all, I do make a big shadow.
Thank you for reading!  and thanks also to the gentleman who helped put up the signs....
God bless you!