Ma and Pa on the front porch

It is kinda weird how one can come up with post titles while swimming, like Ma and Pa on the front porch: 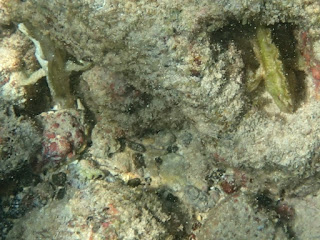 Not only was it two leaf fish, but so close together! Ah, the wonders of God.
I always see a lot of different types of Wrasses....today I heard (in my mind while swimming) that I should do more pix of wrasses, since they are so colorful and with amazing patterns. I'll call it Cover your Wrasse! ha. My brother would love that...he's so into puns... 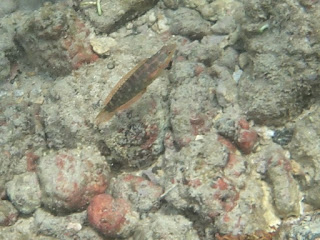 
Saw 5 octopuses today! A banner day! and a total of 4 Leaf Fish. And thankfully, the usual suspects: Brighteye Chromis: 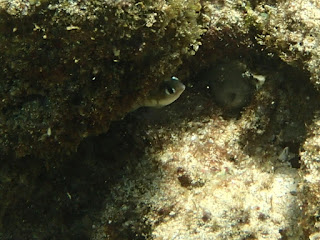 The shell below, the Bubble Shell, was a surprise: an intact shell with no one living in it! I did look carefully, of course, and was happy to see no one inside. 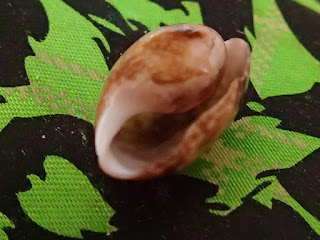 Snowflake Moray eel and a big, fat cucumber. I could never eat one of those, although some people do. But then, really, anything in the water could eat or inhale gunk, I guess, so it's not just the bottom dwellers. 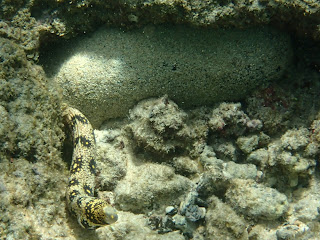 This Pencil Urchin apparently enjoys the protection of being between two coral heads. Seems a bit claustrophobic to me, but I'm not an urchin. 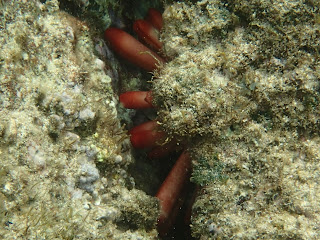 Octopus #1 and a Brighteye Chromis. You can see the rocks that the octopus places outside its den. Maybe like a house number? For i.d. purposes when coming back from a hunt? I really wish I were there when it leaves the den and that I could follow it, videotaping the hunt. (I was able to catch some octopus hunting on video: see my youtube site, octopigirl7) 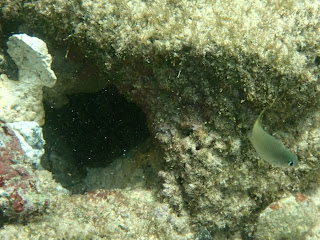 Look inside the hole and you'll see the light tan band of the octopus at rest. 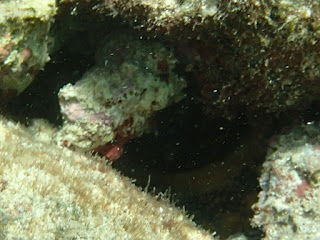 Two very pretty blue Parrot fish swam by. Hard for me to get them in the same shot. 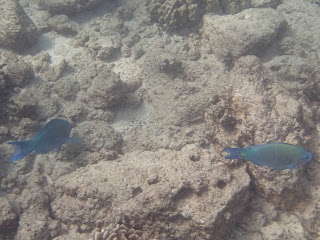 You will have to look carefully...it's a juvenile Rock Mover Wrasse, bending. In the photo, it's in the center and to the left. Click on the photo to enlarge it further. Cornet fish looking for lunch. (I was in the pond later, having come up after church.) 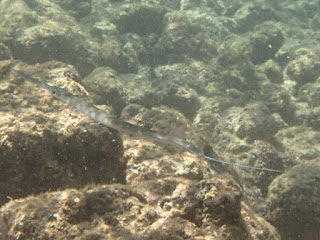 Two Yellow Tail Coris. Again, very rarely do fish cooperate and stay together for my camera. 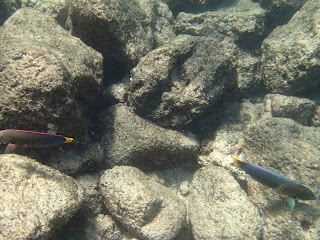 Tiny Trunk Fish. So cute. You see the little box scooting around. 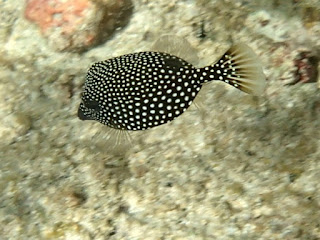 Indo Pacific damsel fish. The yellow makes them seem so sunny and optimistic. 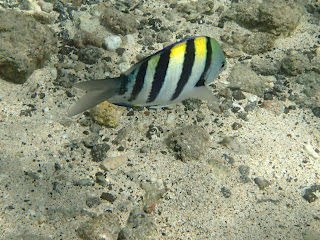 Octopus #3. Remember, I can't control the quality of the background. There are prettier reefs in different parts of the world, but I'll take Poipu...it's close and all the usual suspects are living there! 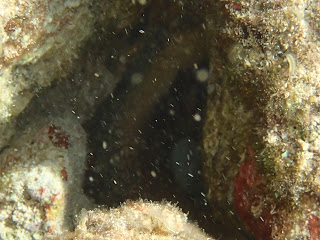 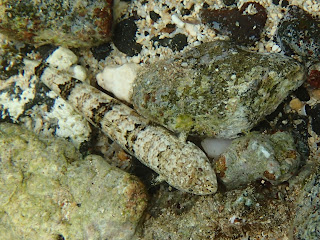 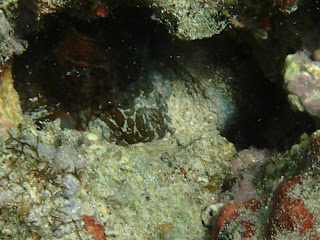 A humu sped by, leaving its trail of sand (see it spilling out of its gills?) 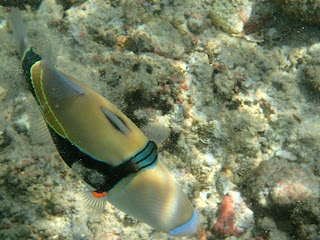 The octopus den was below the fish in this photo, so it got "sanded."


A dark colored Leaf Fish. This was one of 4 Leaf Fish that I spotted. Its head is leaning into the rock, so the parts you can see are tail, body and side fins. 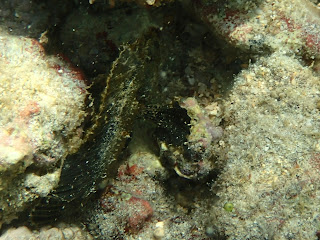 The lighter colored Leaf Fish. This is one that I see quite often. I do wonder: since a lot of the fish in the smaller pond are small, will this fish move on as it grows? 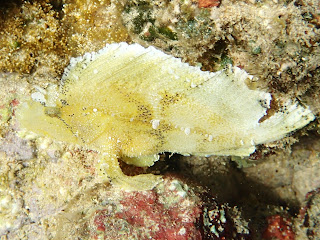 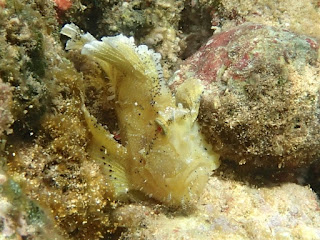 I love the patterns and colors. 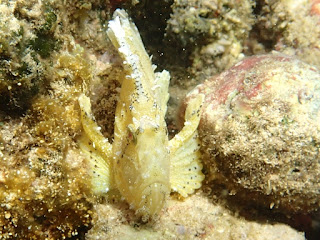 OK, bear with me! Look for the eyes. They are red and kinda sparkly. 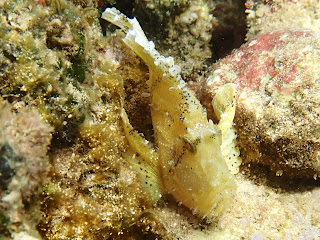 Last one, I promise! I just think these were lucky shots, showing the textures and patterns of this ambush predator. 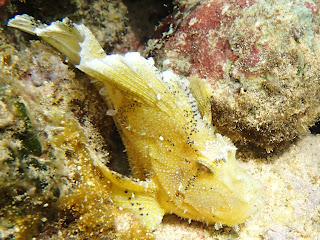 Not a great shot, but this octopus was hiding inside a rocky den in the rocks between the big and the little pond! I was quite surprised to find it there. 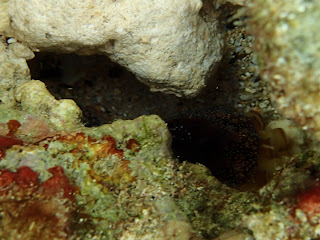 And speaking of surprised: I was looking to the left and when I felt something near me, I looked over and this honu was right below me! I scattered quite a few bubbles while trying to swim away from it. 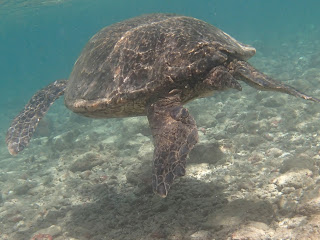 And after it had swum away, it came back again! So I swam away again. And it headed out to the far side of the pond. This was in the kiddie pond. 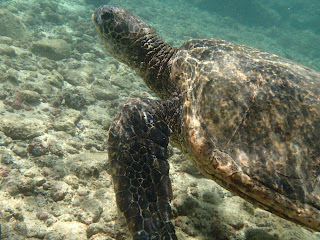 A very tiny Yellow Tail Coris juvenile. Look for the red and white, which is its juvenile coloration. 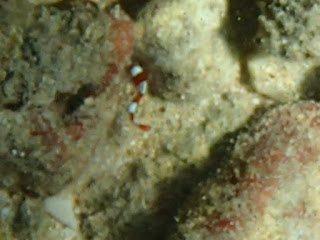 A very nice swim. Quite surprising, too, because normally later in the day, more creatures are hiding because of the density of snorkelers. I'm thankful for all the great sightings! Thanks, God!