Not sayin' I'm lazy, but didn't have the energy to write a post over the weekend. Ended up working at an event on Saturday afternoon, so picture snooping didn't happen until later...and the rest is history.
So here are the photos: but the most important info is that I saw 2 octopuses both days of the weekend! That's a plus.
And because I'm not feeling at the top of my game, I'm home from work, so I now have the time to write a post.
So Saturday: 5 turtles on the beach! I think that's a record for me.  Also a record is that no one was bothering them...staying a good distance away and letting them have their space. That's a great thing. 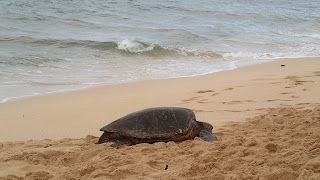 Of course, not all the turtles would fit into one shot, so here's the first one I saw.  Not as interactive as an octopus, but cool all the same! 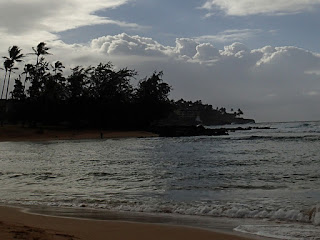 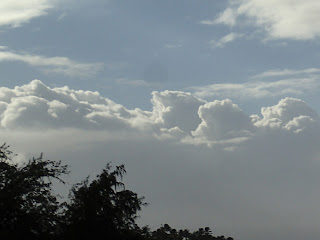 You might remember I love to photograph clouds.  Poipu doesn't disappoint! (And neither does God.) 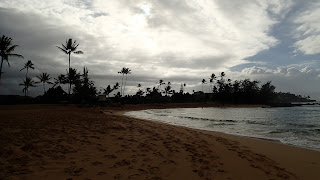 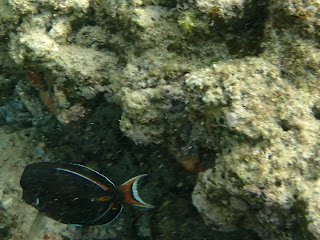 This is the one and only White Cheeked Tang I have seen recently. Wish it had a friend! 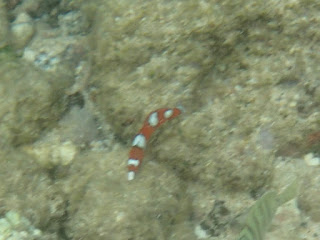 This is the juvenile version of the Yellow Tailed Coris. VERY different from the adult. 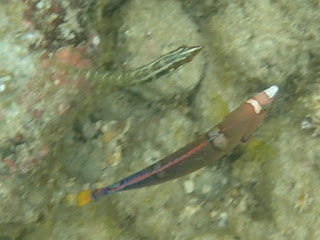 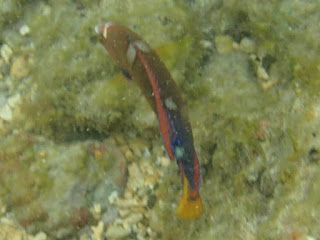 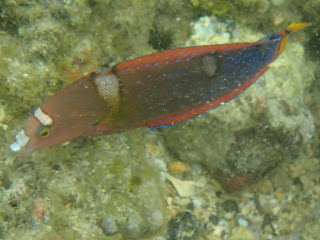 This "in-between" one is starting to show the blue and red and yellow of the adult, but still has the white lined-spots of the younger version. Isn't that a great design?
And speaking of great designs, the male Trunk Fish. One of our favorites. Very pretty spots on the back, lovely blue color underneath and the yellow bar on its head. If only it would not be so shy! 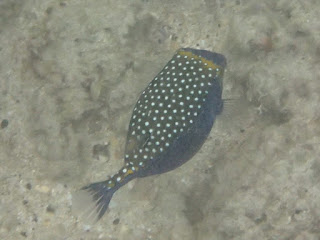 Two lively Hawaiian Cleaner Wrasse.  I have noticed a different possible type of cleaner, but it could also be masquerading as one. I'll see if the pix turned out. 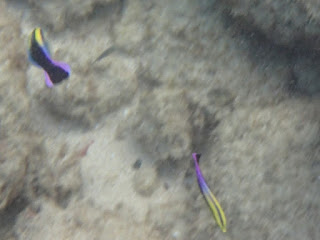 Below is the Peacock Grouper. Not a great photo because of the water's visibility, but I do love the blue. It is the scourge of the sea, apparently: it eats everything and is reportedly quite a bully. 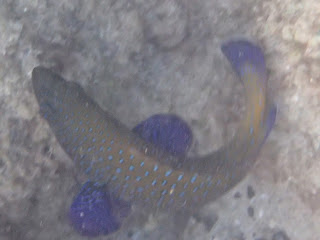 Octopus #1. Of two! Was I thrilled or what?! This shows its eyes and part of the head. 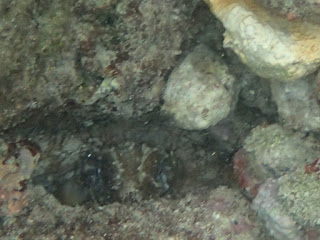 Here you can see the siphon and part of the arm, with its suckers. 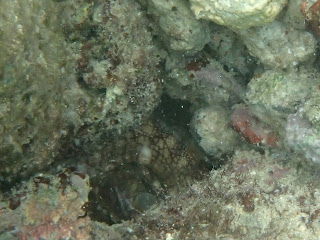 Octopus #2 was larger, but also a good hider: 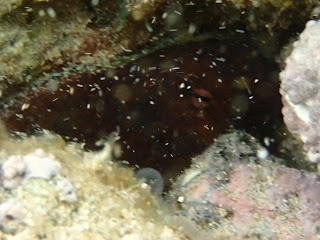 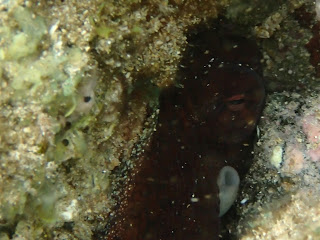 Another shot of the same octopus, showing eye (horizontal line with red on top and bottom) and the siphon. 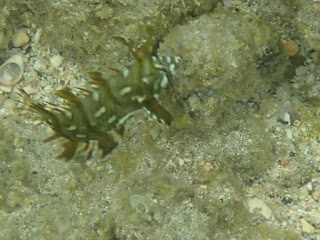 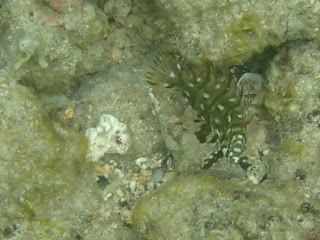 Not only does the Rock Mover Wrasse juvenile look like seaweed, but they move about in the water as seaweed does. You have to be really paying attention to see 'em. But worth the search. 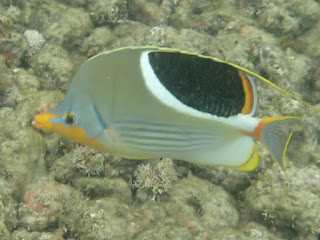 Saddle butterfly. These fish also are shy and will zoom away when they see people. Usually in sets of two. 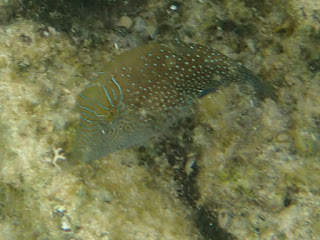 To the left and below, one of my faves: the Ambon puffer fish. I haven't seen one blow up, but they can blow up their bodies with water to make themselves larger and harder to swallow if a predator bites them. I was thinking they blow up with air, but how would they get that? 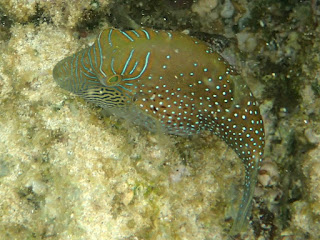 Cute little blenny. I call it the plaid one. Normally, they dart into hiding, but this one let me film first. 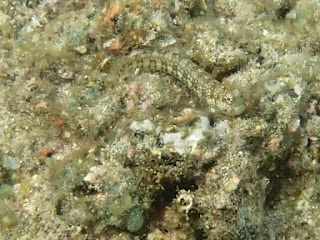 And a foretaste of Sunday's animal photos: the flounder! I saw 3 of them, actually.  One, unfortunately, I scared: I didn't see it and I put my hand down to pick something up. It flew away. They are FAST!! 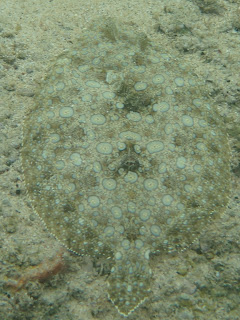 Sergeant Major. A bigger one than I usually see. They are very adorable. Even though it's not hair, I think of them as having a Mohawk. 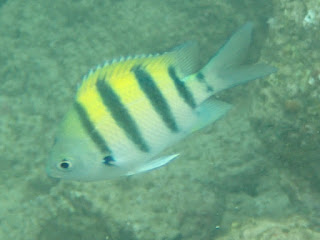 Next photo is Convicts and Surgeons! The Convict Tangs and Ringtail Surgeons hang out together, searching for food. I think they eat algae and seaweed, but not really sure. You'll have figured out by now that I love the colors, designs and movement of the fish and octopus, but don't concern myself as much with what they eat. Unless, of course, it's a shark. Then I would be concerned! But, thank God, I haven't seen any sharks since arriving on Kauai. 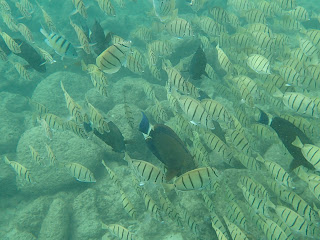 OK, I'll write Sunday next. Thank you for reading!