Well, I got lazy yesterday and didn't write, so today I'll cram 2 days of swimming into one post.  Both days had 3 octopuses.  They may have been the same 3 on both days, but hard to tell. 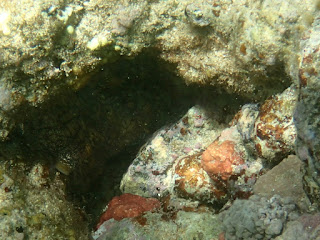 You can just see its little sucker on the left, adhering to the rock. Good hiding octopus.
Here's octopus #2...look closely: 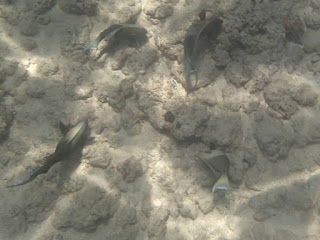 Now, don't be distracted by the fish. Those Orange Shoulder Surgeon fish didn't even know the octopus was there, I'll bet! The octopus is the brown blob in the middle of the picture...it was hiding in a hole in that rock. And deeper pond, too, so I couldn't get very close.

Shortly after that, I saw something glinting about 15 feet down.  After several dives, I had to give up getting it.  By the time I could get my finger under it, I had pushed it under a rock.  Looked like sparkly heart, maybe a pendant...oh well.  Can't rescue them all!
The octopus #3 did some peeking at me yesterday. 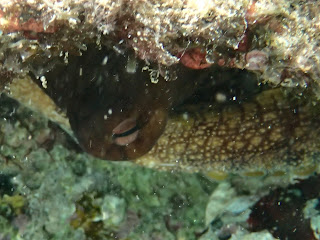 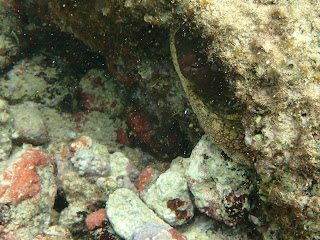 Love how they peek at me!
This was definitely an adult.  Biggish. And curious.  That's not necessarily a good thing..if I were an octopus hunter, that would be all it took to get caught. Perish the thought. 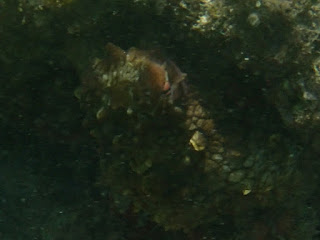 The eye is the brown rounded part, with the small slit in it.
So today's swim wasn't as long as yesterday's four hours...I blame the seal.
I heard the lifeguard beep that tells you they're going to say something.  So I stopped and popped up. One of the seals that had been sleeping on the beach had awakened and gone swimming. At first toward the small pond, then I decided to get out until it had settled. 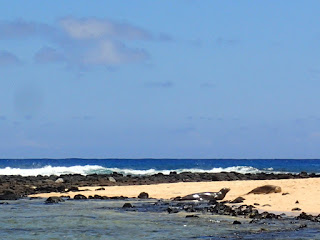 It was cute...the seal that had been sleeping on the island looked up at the interloper.  But I guess they were ok with being near each other, as they didn't fight, but went back to sleep.
Here's a weird crab, I think a Common Box Crab: 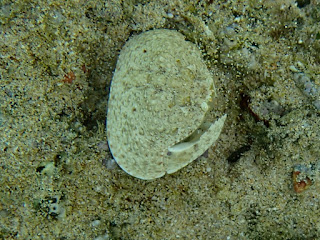 If it hadn't moved, I would have thought it was just part of the sand, probably...
And the last thing from today's 128 photos (2 hours) is the hook I took a photo of once I got it home. Not only was it a horrible, 3 pronged affair, but it had become rusty.  Yuck: 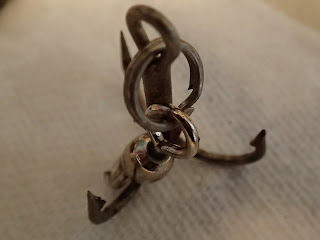 It could have done some real damage, especially if someone walked on it.  But now it's safely in our trash receptacle.  No passing this one along to another fisherman!
So back to yesterday: a nudibranch.  I think it's a Spanish Dancer, as far as I can guess: 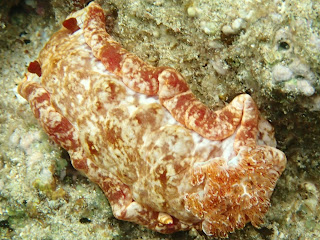 Aren't they odd?  The head is at the top of the photo.  The "naked lungs" at the bottom.  They wave in the water.
And since it's been a while, palm trees for my sweetheart: 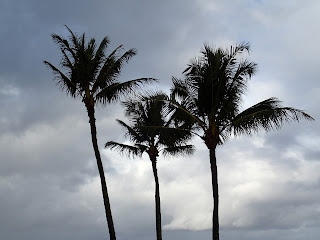 It had been raining where we live, but by the time I got down south, it was just a cloudy thought of rain, not the real deal. 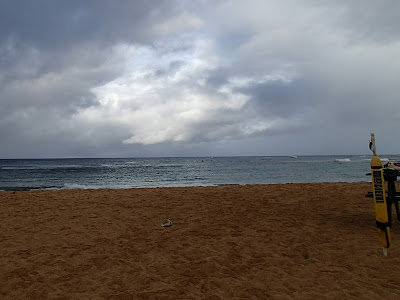 Pretty, though, right?  The yellow at the right is one of the lifeguard dive pads. They don't patrol this half of the beach (state versus county, I'm told), but I thought the light and clouds were pretty.  This lifeguard pad is where I stand to pray before entering the water.
First things first!
There were several little tiny box fishes.  So cute: 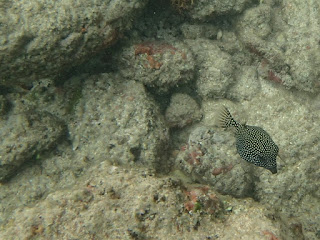 Maybe 3 inches, including the tail.  These little ones are much more skittish than the larger versions.  Both types are pretty standoffish.  Well, swim off-ish!
I think this is a blenny. 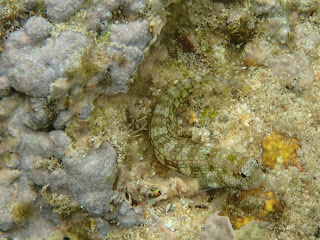 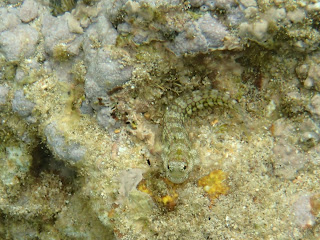 Cute, eh?
I couldn't believe it sat there and let me take its photo, several times...normally, they run back inside to hide.  Maybe I was Ninja Octo-Woman yesterday...It could happen.
Plenty of shells: 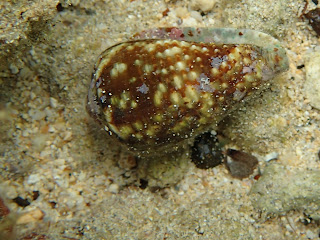 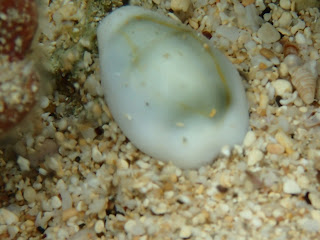 Now, I KNOW this one is called a money cowry.  Because that's how it was used. 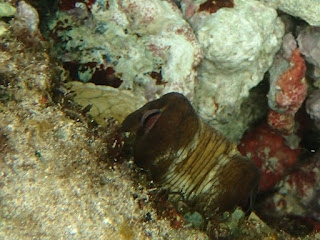 Just can't get enough photos of the octopus eyes...this one at least has 2 almost...This was a photo I caught from above the octopus. 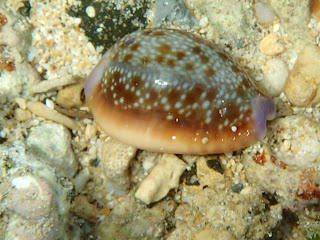 I don't know the name of this Cowry Shell, but in my note, I called it the Sweet Cowry...so pretty! Nice designs on the outside, and pretty colors at one end. And no, I didn't collect it.  Seemed in good shape, so I assumed someone was still using it.  Maybe 2 inches long.. 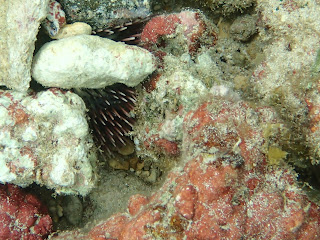 This urchin (look for the spines) had a whole bunch of rocks attached to it.  For protection, I can only imagine...
Juliana's Sea Hare: 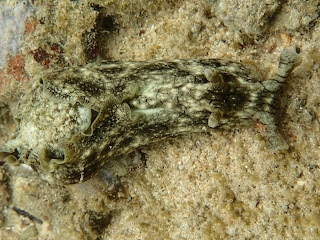 Isn't that a strange looking animal? Kinda like a nudibranch, without the lungs outside.  The head is at the right.  It just inches along...
And last but not least, a crab claw: 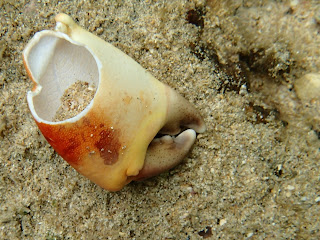 Did I forget to mention that it had been someone's crab dinner? oops. I have never seen a crab this large in the water, so perhaps it moves around at night. With the bright orange coloring, it's hard to imagine that if it were in my neighborhood, I would miss it. 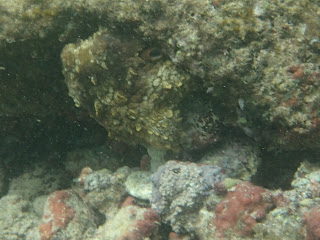 I guess I just can't leave this octopus alone....This is more of the body than I usually get to see, so happy about it. They are really cool animals. Great swim. And I'm happy that I let the seal have the right of way. After all, they live there..