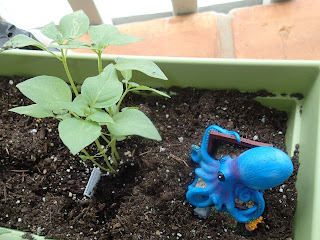 Because I didn't find any "real" octopuses in my dive after church, here's the octopus that I did find: in my garden! I recently started growing some plants, and put this octopus that is designed to be in an aquarium in my garden. Most of the real octopuses aren't blue. ha.

I did see Trunk Fish: 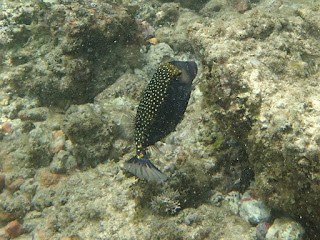 Looks as if he's standing on his tail.  The water was not friendly... waves and rip currents.  I guess summer on the south shore has arrived.  But stay tuned: I'm hoping to visit beaches on the North shore next weekend, God willing. 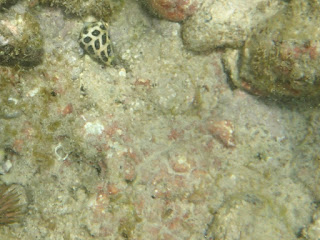 Nice Hebrew Cone Shell. It's called that because the markings look like Hebrew writing.  I guess they do, somewhat! 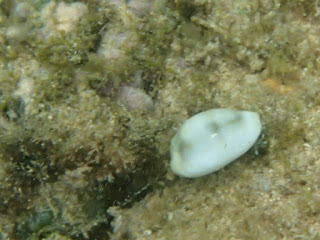 This is the Money Cowry.  These shells were used as money in some countries.  Maybe still are. I think they are pretty and so different from their cousins:
Snakeshead Cowry: 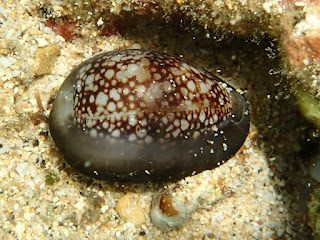 These are the ones I see most often.  Same type that I accidentally picked up last weekend, only to find the animal still inside.  But all ends well: that boy helped me throw it back into the ocean in a lifesaving episode.
I don't have a photo of the wedding ring I found, as I forgot to snap one.  But it was a steel ring..the Lifeguard said they have a lot of these in a book in their guard shack.  Mostly men's...
Have a great week.  Here's hoping for more octo-snooping next weekend! And thanks to God for the water safety...yesterday the right side was closed to swimming as the water was still ripping right along.
P.S. I took only 56 photos! That tells you how the water was...